The Vatican and Saudi Arabia do not have diplomatic ties, but Abdullah met Benedict’s predecessor John Paul II in 1999 – at the time he was the crown prince.

The Vatican said the talks in September between al-Faisal and Benedict centred on defence of religious and moral values, the Middle East conflict, the political and religious situation in Saudi Arabia and the importance of inter-cultural and inter-faith dialogue.

Abdullah, 84, is the custodian of Islam’s holiest mosques in the Saudi cities of Mecca and Medina, sites of pilgrimages by millions of Muslims every year.

Vatican officials urged Saudis to allow greater religious freedom in Saudi Arabia, on the eve of Tuesday’s meeting in the Vatican.

Bishop Paul Hinder said on Monday: “Muslim Saudi Arabia should guarantee more freedom and security for minority Christians and allow more priests in to administer to the faithful.”

Hinder, a Swiss national who is the bishop of Arabia, said he hopes the encounter could lead to diplomatic relations between the Vatican and Islam’s birthplace.

“What I am hoping is that there can be more security and freedom for our people in a very low-profile manner,” he said in an interview with Reuters news agency.

“I am not expecting to be able to build a cathedral … but at least the freedom to worship in security.”

Vatican officials often ask why church construction is banned in Saudi Arabia while Muslims can build mosques in Europe.

There are 1.2 million Christians in Saudi Arabia, nearly a million of them Catholics. Most are migrant workers, including a large Filipino community.

They are only allowed to worship in private places, usually homes, and cannot practise their faith nor wear signs it in public.

Hinder said rules regulating private worship by non-Muslims in Saudi Arabia were not clear and were open to interpretation.

The Vatican has often called for greater rights for Christians in predominantly Muslim countries. But it considers Saudi Arabia a severe case. 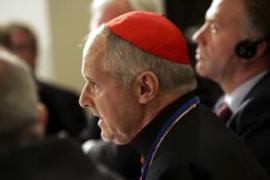