Benazir Bhutto, a former Pakistani prime minister, on Monday said that the deteriorating situation could destabilise the whole region.
Speaking to Al Jazeera, Bhutto said: “The attention of the country has been diverted from the militants who are trying to control the tribal areas of Pakistan, who are knocking on the doors of our frontier province and have their eye on Islamabad.
“Our internal security should be protecting our citizens from bomb blasts and instead, we find that the internal security is busy rounding up members of bar associations, civil groups and political groups.”
About 1,500 people have been detained in a crackdown on opposition to the president’s decision.
Around 2,000 lawyers gathered in the eastern city of Lahore despite police warning them not to violate a ban on rallies across the country.

Hundreds of police entered the city’s high court and fired tear gas as they attacked lawyers inside the building.

“Police lobbed more than a dozen tear gas shells at lawyers who had gathered in the high court and then beat them with batons,” Sheikh Faisal, a lawyer at the court, told the reporters by telephone.

Elsewhere, in Rawalpindi riot police sealed off courts and made arrests, with witnesses saying that they saw police beat a photographer and snatch his camera. Lawyers beaten In Karachi, protesting 100 lawyers were beaten with batons and arrested after police and paramilitary soldiers sealed off the high court and barred journalists and lawyers from entering.

One police officer said: “We have been ordered to remain on duty here, we cannot comment on arrests.”

Witnesses said Karachi police also cordoned off the house of Sabihuddin Ahmed, the Sindh high court’s former chief justice, who had been removed under the emergency rules, and arrested his son during the protests.

Clashes were also reported in Multan.

Al Jazeera’s Nadim Baba, reporting from the capital Islamabad, said lawyers had cancelled planned protests because they were prevented by the police from approaching the supreme court.

A senior judge said that most of Pakistan’s judges, including Iftikhar Muhammad Chaudhry, the dismissed chief justice, had been placed under virtual house arrest after refusing to take an oath under the provisional constitutional order issued on Saturday.

“There is a heavy security deployment and our houses are locked. We cannot go out and no one can come in,” Rana Bhagwandas, the country’s only Hindu supreme court judge, said.

“We are confined to our rooms. We wanted to go the Supreme Court but they locked our houses from outside and have deployed heavy  security.”

Hundreds of opposition supporters are also among those being held by security forces.

Qazi Hussain Ahmed, the leader of the Jamaat-e-Islami party, told Al Jazeera that he was told he had been arrested because he was “a threat to law and order”.

“General Musharraf is an unconstitutional and unlawful ruler, and he has suspended the constitution which is high treason … he must be arrested and tried for high treason,” he said.

Condoleezza Rice, US secretary of state, said the president should leave his military post and that the country should move towards elections under the constitution.

“We believe that the best path for Pakistan is to quickly return to a constitutional path and then to hold elections,” she told a news conference during a visit to the Palestinian territories. 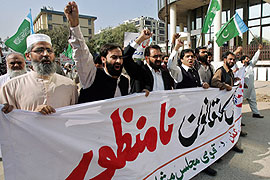 “President Musharraf has said that he will take off his uniform. That would be an important step.”

The White House said it was “deeply disturbed” by the situation and confirmed that US aid to its ally was under review.

Britain has also urged Pakistan’s government to restore normal democratic and constitutional processes, while the Netherlands suspended aid to the country.

Aziz had said on Sunday that elections could be delayed by up to one year, but on Monday said: “Our thinking about the election is that it will be held according to schedule.”

He did not specify whether he meant that the polls would take place in January, but Abdul Qayyum, Pakistan’s attorney-general, confirmed that national and provincial assemblies would be dissolved in 10 days time to allow elections in mid-January.

“It has been decided there would be no delay in the election and by November 15, these assemblies will be dissolved and the election will be held within the next 60 days,” Qayyum told the Reuters news agency.

Earlier on Monday, Tariq Azim, the deputy information information minister, had to deny rumours that had spread across Pakistan suggesting that Musharraf had also been put under house arrest.

Azim said that the president had “laughed off” the reports saying that the vice-chief of the army had ordered him detained.

Pakistan‘s security situation has deteriorated since July, when armed fighters stormed the Red Mosque in Islamabad to crush a Taliban-style movement.

Since then nearly 800 people have been killed in violence, which has included more than 23 suicide attacks.