On Thursday a Chinese communist party-owned newspaper signalled a possible cause of the row, blaming a US decision to sell an anti-missile defence system to Taiwan.

Citing an unnamed colonel in the Chinese military, it said the decision “obviously sent the wrong signals” to Taiwan‘s leaders, who Beijing accuses of seeking to declare formal independence.

“At a time when the US side is seriously harming China‘s interests, there is no logic under heaven by which China should then be expected to open its heart and embrace him,” the paper said.

The issue of the port visits was also brought up at the White House on Wednesday during talks between George Bush, the president, and the visiting Chinese foreign minister, Yang Jiechi.

Yang reportedly told Bush the case of the Kitty Hawk was based on a “misunderstanding”, a White House spokeswoman said, although no mention was made of the barred minesweepers.

Last week’s decision to block the Kitty Hawk visit was initially explained away by the Chinese authorities saying they had not received advance notice of the visit.

They then said the carrier group would be allowed to dock, but by that time navy commanders had decided the ships would head back to their home port in Japan.

The Kitty Hawk has made several previous visits to Hong Kong, a port that has been used as a regular “R&R” stop for US warships since the time of the Vietnam war.

Navy officials have said that while the Kitty Hawk case received most attention, they are most troubled by China’s refusal to let the two navy minesweepers enter Hong Kong harbour to escape an approaching storm and refuel. 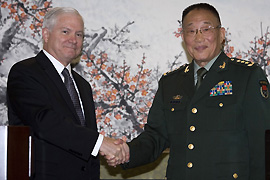 “It is not, in our view, conduct that is indicative of a country who understands its obligations as a responsible nation,” Admiral Tim Keating, head of the US Pacific Command, told reporters on Tuesday in a video conference from his headquarters in Hawaii.

The minesweepers, the Patriot and the Guardian, were instead refuelled at sea and returned safely to their home port in Japan.

“It is baffling,” Morrell told reporters at the Pentagon. “It’s regrettable and we have not to date received sufficient explanation as to why it took place.”

He said the Chinese defence attache in Washington had been summoned from the Chinese embassy on Wednesday to receive the formal protest.

Beijing has previously barred US warships from Hong Kong during times of crisis in US-Chinese relations, such as the US bombing of the Chinese embassy in Belgrade in 1999 and after a US P-3 spy plane collided with a Chinese fighter in 2001, he said.

But the latest dispute apparently caught US officials by surprise, coming just three weeks after what appeared to be a successful visit to Beijing by the US defence secretary.

During the visit Robert Gates urged Beijing to step up contacts between the two countries’ militaries to avoid misunderstanding and miscalculations. 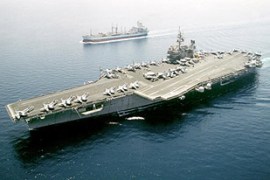 Decision comes too late for US aircraft carrier group with its 8,000-strong crew. 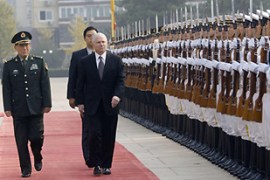 China and US agree military hotline 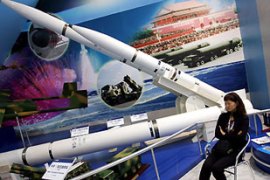 China ‘Frankenstein threat’ to US

Strong criticism of China in US congress amid worries over military build-up. 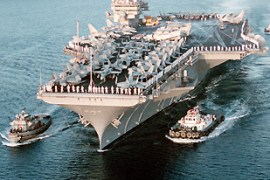 US military expresses “displeasure” to China over bar on warship visits to Hong Kong.