More than 160 flights were cancelled at Rome’s main Fiumicino airport alone and railway services were hard hit in several parts of the country, with almost all trains cancelled in Florence.

Trains and boats crossing the Straits of Messina connecting Sicily to the mainland also ground to a halt.

Undeground services in Rome and Milan were suspended.

Giorgio Martello, a bus driver, said: “We are united, at least I believe. People are with us.”

Several national unions said a high percentage of transport workers had adhered to the strike, with the rate at 100 per cent in many areas.

Meanwhile, commuters were putting on a brave face.

Filippo Mainardi, who was hoping to catch an early train at Rome’s main station, said: “I believe they are right to strike, even if it creates disruption.”

For people in the capital, the only consolation was the end of a protest by taxi drivers that had paralysed the centre of the city for two days.

Unions have threatened more protests if their concerns are not addressed. 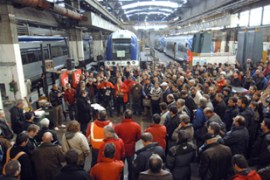 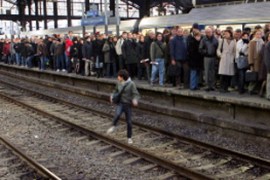 The action is the first major challenge to the president’s pension programme.