Tens of thousands of Georgians have gathered in Tblisi to protest against the rule of Mikhail Saakashvili, the country’s president.

As many as 70,000 opposition supporters were estimated to have turned out in front of the parliament building in the capital to demand that the president’s powers be curbed. The protesters said they would not leave until their demands were met.

The demonstration on Friday represents the largest protest against Saakashvili since he took power after the bloodless ‘Rose Revolution’ four years ago.

The opposition demands include early parliamentary elections and stronger opposition oversight for the polls.

Leaders of the protest demanded that Saakashvili open negotiations with them by Friday.

“We want our people to be the master in the country, not slaves,” Shalva Natelashvili, one of the leaders of the opposition bloc, said.

“We need a government which will serve its people and not vice versa as it is now.”

Many protesters waved flags with the words “I am not afraid”, the slogan of an opposition coalition formed this year in response to what critics of Saakashvili call his authoritarian style and the arrest of a leading political opponent.

The authorities said they were respecting the protesters’ right to gather.

Opposition leaders said the former defence minister Irakly Okruashvili, whose arrest provoked the divided opposition into staging the united protest, had been forcibly flown out of the country to western Europe to stop him from taking part in the protests. 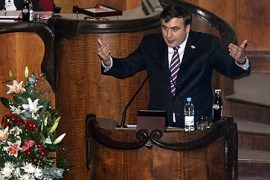 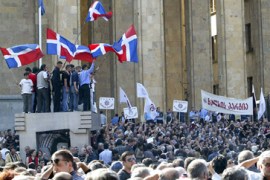 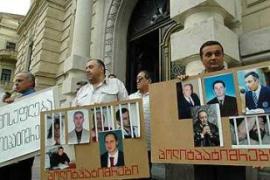