Abdul Hameed Dogar, the chief justice Musharraf hand-picked after purging the supreme court when he imposed emergency rule on November 3, administered the oath to Musharraf.

Musharraf said that general elections would take place on January 8 “come hell or high water,” but rejected Western pressure to lift a state of emergency.

“We want democracy, we want human rights, we want stability, but we will do it our way,”  he said in his first speech as civilian president.

“We understand our society, our environment, better than anyone in the West.”

Hyder said: “[But] critics will tell you that this is false, and is being used to justify the current state of emergency.”

He said: “Benazir Bhutto and Nawaz Sharif are back. I personally feel this is good for the political reconciliation I have spoken of.”

However, neither were present at the ceremony and it remains unclear whether the changeover would defuse the threat of a boycott of the elections.

Such a move would undercut Musharraf’s effort to legitimise his rule through a democratic ballot.

Meanwhile, Sharif has said that Musharraf’s oath of office had no legitimacy and he demanded the reinstatement of judges sacked under the emergency.

In the city of Lahore, about 250 lawyers in black suits clashed with police outside the city’s main court.

Both sides hurled bricks at each other.

“We don’t accept Musharraf even without his uniform. He has to go,” said Malik Mohammad Arshad, a lawyer.

His eye swollen and head bleeding after begin hit by a brick.

Lawyers have led widespread opposition to Musharraf since he dimissed Chaudhry in March.

George Bush, the US president, praised Musharraf as “an absolute reliable partner in dealing with extremists and radicals” and hailed his decision to bow to quit as army chief.

Bush said: “It is something that a lot of people doubted would ever happen. And he told me he would take off his uniform, and I appreciate that, that he kept his word.”
As civilian president, Musharraf will have the power to dismiss the government.

Bhutto said on Wednesday that Musharraf had met one of her key demands, but said that “we are not in a hurry to accept Pervez Musharraf as a civilian president”. 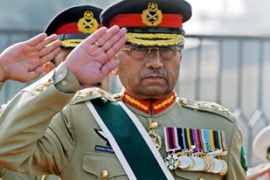 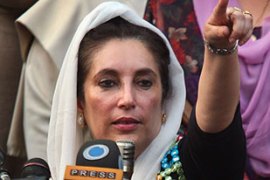