Two other brigade members – Abdallah Astal, 22, and Khami Abu Ruyia, 18 – died when a tank shell hit them in another area in the south of the Gaza Strip.

But the Israeli army spokeswoman said they were victims of a second air attack.

On Wednesday, two Hamas security men were killed in an air raid that Israel said was a response to mortar fire.

Hamas seized control of the Gaza Strip in June after fighting with forces loyal to Mahmoud Abbas, the Palestinian president.

Abbas has been in Washington this week attending US-sponsored talks with the Israeli government.

Abbas, who leads the Palestinian Fatah movement, and Israel have ruled out any negotiations with Hamas, a rival Palestinian group which does not recognise Israel.

Ehud Olmert, Israel’s prime minister, Abbas and George Bush, the US president met at the White House on Wednesday to formalise the beginning of a new process towards a Palestinian state.

The new intiative came nearly sixty years to the day after the UN General Assembly passed a resolution stating that Palestine should be partitioned between Jews and Arabs.

The map of resolution 181 proposed that an Arab state take up around 43 per cent of the Palestinians’ former legal territory, with the rest going to the Jewish population.

Palestinians rejected the idea completely. At the time Jews owned only 7 per cent of the land.

Israel now controls an area about twice the size of what was originally planned by the UN. 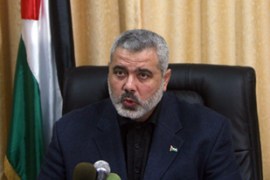 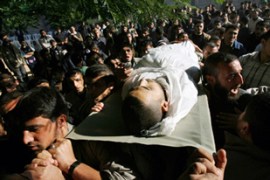