Al Jazeera’s Teresa Bo, reporting from Bolivia, said that protesters were burning tyres and waving sticks during their 24-hour strike on Wednesday.

She reported that an estimated 1.5 million indigenous workers living in Santa Cruz, Bolivia’s richest province, support the government and say the proposed changes represent the only chance for change.

The strike, which follows protests over the weekend in the city of Sucre in which four people died, mainly affects the wealthier, eastern provinces where Morales’ opponents are strongest.

They accuse Morales of pandering to his Aymara and Quechua Indian power base and of ignoring other Bolivians.

Meanwhile, the government warned the strikes could lead to renewed violence.

Alfredo Rada, the interior minister, said: “The police will fulfil their role. Of course we’re not going to be provoked.

“We know there are people interested in generating a climate of violence.”

Morales said: “The strike … is against this process of change, the new economic model, against the nationalisation of natural resources.”

Morales’ allies had voted through a draft of the new constitution on Saturday without opposition delegates, sparking violent protests in the city of Sucre, where the constitutional assembly sits.

The congress also approved a motion allowing the assembly that is rewriting the constitution to hold its sessions anywhere in Bolivia, and not just in Sucre as initially planned.

Analysts say this will further infuriate the opposition, which wants the colonial city to regain the status as sole capital it lost to La Paz in a civil war in the 19th century.

Morales further angered landowners by signing a decree on Wednesday expropriating 180,000 hectares of land in the Chuquisaca province to be given to the indigenous Guarani people, who he said were living in “a situation of captivity”.

The increasingly volatile situation in Bolivia has drawn appeals for calm from the US, the UN, and the Organisation of American States.
Opposition members have boycotted the assembly, accusing Morales of trying to take more power through the constitutional changes.
Jorge Quiroga, Bolivia’s former president and a key opposition figure, claimed the proposed constitution was “drafted in a barracks, written with rifles and bayonets, and stained with the blood of the people of Sucre”.
Source: Al Jazeera, News Agencies 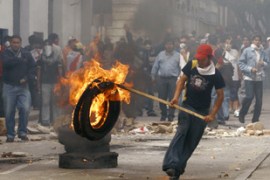