As night fell, the regional government in the Val d’Oise region north of Paris – the epicentre of rioting – reported a few scattered incidents of cars and garbage cans set on fire, but said the situation was mostly calm.

Three people were taken into custody.

French authorities had deployed 1,000 policemen to counter rioters, but struggled to contain youths who hurled petrol bombs and bricks, shot at officers and burned cars and buildings.

Sarkozy said that the offence “has a name, it is attempted murder.

Opening fire at officials is completely unacceptable … we will find the gunmen”.

Sarkozy’s remarks came after a hospital visit on Wednesday to see one policeman critically injured in the first night of rioting in Villiers-le-Bel.

The violence was sparked after two youths were killed in a motorbike collision with a police car  in the northern Paris suburb of Villiers-le-Bel on Sunday. 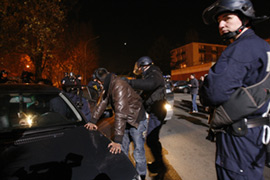 The authorities have deployed about 1,000
policemen to curb the violence[AFP]

Rioting spread outside the Paris region overnight on Tuesday, with dozens of cars being set alight in the southern city of Toulouse.

Patrice Ribeiro of the Synergie police union put the figure at 20 – down from more than 80 the night before.

Youths lobbed Molotov cocktails and stones at police in Villiers-le-Bel but no firearms were used, he said.

About 138 cars around France were burned overnight Tuesday-Wednesday, which Ribeiro called almost “normal”.

Police say as many as 100 cars are burned every night around the country. 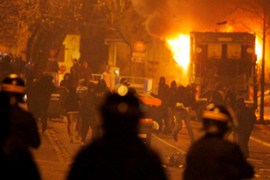