Li Quan, founder of Save China’s Tigers, said the cub was “healthy and strong” but conservationists had had to separate him from his mother to avoid being exposed to extreme cold.
“Although his eyes have not yet opened, he is already quite vocal, especially at feeding time.”

Li said the cub would eventually join its mother, four-year-old Cathay, and father, TigerWoods, on the reserve where it can learn to survive in the wild.

There are no tigers in Africa except in zoos.
“The rewilding programme of these highly endangered South China Tigers has taken a major step forward with the birth of this cub,” she said.

“The tigers brought to South Africa from China have now not only proven they can hunt and fend for themselves, they have also proven that cubs can be bred in a natural environment.”

Since 2003, four tigers have undergone training at the reserve about 600 kilometres from Johannesburg, South Africa’s biggest city.
China is reportedly preparing to establish a pilot reserve for the eventual return of the tigers.
The South China tiger, also called the Amoy or Xiamen tiger, is thought to be the ancestor of all tigers and is considered critically endangered mainly due to loss of habitat.
Their numbers have dwindled from an estimated 4,000 in the wild in the early 1950s, according to the World Conservation Union’s Red List of threatened species.
Source : Al Jazeera, News Agencies 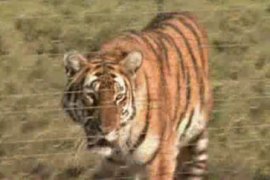 Out of zoos and into Africa

A plan to save the endangered South China tiger is under way in South Africa.