Many Sunnis formed groups in 2006, as “concerned local citizens”, to fight al-Qaeda and to guard their neighbourhoods.

These groups, now backed by the US military, have seen success in some Sunni areas of Iraq, especially in the western Anbar province.

“These are honourable, courageous men, who want to protect their relatives and property from al-Qaeda,” al-Samarraie said.

His organisation oversees the management of all Sunni shrines across Iraq.

In the Iraqi parliament, meanwhile, Shia and Sunni members have clashed over a controversial bill that would let former officials of Saddam Hussein’s Baath party to return to public life.

Washington regards the bill as vital to reconciliation efforts in Iraq and has made its adoption one of 18 benchmarks against which the progress of the Shia-led government will be measured.

The bill was rejected by Shias when it was given its first reading in parliament on Sunday.

Feuding MPs argued again when the debate continued on Wednesday.

Falah Shanshal, an MP loyal to Shia leader Muqtada al-Sadr, said: “We demand the law be rewritten by the cabinet so that it helps in compensating the families of the victims of the former regime.”

A day earlier, a delegation of Sunni religious scholars visited the city of Najaf, 160km south of Baghdad, where they met a number of Shia counterparts.

The delegation of the Sunni Association of Muslim Scholars and the Sunni endowment met Ayatollah Ali al-Sistani in an effort to unify the Iraqi people.

Al-Sistani, the highest Shia authority in Iraq, called on Shia Muslims to defend the political and social rights of the Sunnis before defending their own rights.

“I am a servant of all Iraqis … I love everyone as religion is love … I wonder how enemies could split between Islamic sects”, the statement said quoting al-Sistani.

“These meetings between the Shia and Sunni scholars are important and useful as there are no real differences between Shias and Sunnis, yet there are philological differences that exist even inside the same sect.

“We are united under one Kaaba, prayers and fasting.

“I am with all Iraqis when demanding their rights and will not prefer one to another as Shias and Sunnis are equal.”

On Tuesday, Major-General Douglas Stone, the commander of US prison camps in Iraq, said he wanted to cut the number of Iraqis in his custody by two-thirds by the end of 2008 as part of a wider counter-insurgency plan.

The majority of about 25,000 detainees held by US forces are Sunni Arabs accused of fighting the Shia-led government and US troops.

Speaking to Reuters at Camp Bucca in southern Iraq, the US military’s largest detention camp in the country, Stone said: “We are looking at a number that is in the sub-10,000 or 8,000 level for real difficult, challenged guys.

“The rest of them we think we can work through and get out.” 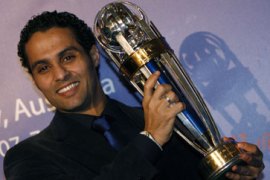 The Saudi Arabian captain looks for a European move. 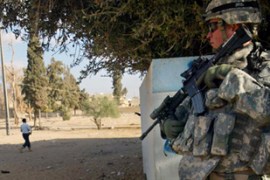