As international politicians prepare for a summit in Annapolis aimed at restarting the Israeli-Palestinian peace process, ordinary people in Israel and the Palestinian territories remain as divided as ever.

As part of its Walls of Shame series, Al Jazeera visited the West Bank separation barrier which is keeping the populations apart.

Another Friday afternoon in the West Bank village of Bilin and another demonstration against the Israeli government’s wall that will take over half the village’s land.

The wall is an example of what happens when diplomacy and conciliation fail. It stands at just over 700km long so far and has costed an estimated $2m a kilometre.

It was begun in 2002, and it goes deep into Palestinian territory in the West Bank and Jerusalem, dividing neighbours and encircling villages.

One of the demonstrators in Bilin, Adar Grayevski from the Anarchists Against Walls group, describes the barrier as a “wall of shame” because it is ruining the income of Palestinians who find their movements restricted.

“It is ruining the lives of hundreds of thousands of Palestinians. Israel is blindfolded, [it] is refusing to see and the population of Israel is not ashamed,” she tells Al Jazeera.

The wall is the biggest construction project in Israel, and one that its supporters, including Ilan Tsion from the Fences for Life group, claim is necessary to ensure Israel’s security.

“This fence is for security reasons. This fence is only for blocking suicide bombers from Israel,” Tsion tells Al Jazeera.

However, plans for the division of Israel and Palestine pre-date the relatively modern phenomenon of suicide attacks. The plans were decades in the making.

Arnon Soffer, a professor at the university of Haifa, is the man who first drew up maps for the construction of a wall in the 1980s before Ariel Sharon became the politician who made it a reality on the ground.

“The day he was elected for a second time as prime minister, this very important evening, he called me to bring him the next day my map with my proposal about the disengagement,” Soffer says.

“If you ask me how I did the map I would say 90 per cent I took in my consideration demography, two or three per cent holy sites and maybe seven or eight per cent only security.

“My vision was that if I would like to keep Israel as a Jewish democratic state, we cannot enjoy the luxury of having all of Palestine.”

Quoting the US poet Robert Frost, Sharon once told George Bush, the US president, that “good fences make good neighbours” in a bid to allay the fears of Israel’s backers about the wall.

But Palestinians and Israelis have never been good neighbours and the wall is a physical reminder of the antipathy on both sides with the very name the divide a contentious issue.

Israel’s official name for the wall is “separation barrier”, yet some consider it a wall and others say it is a fence.

“Only three per cent of the barrier is wall, while 97 per cent is fence,” Tsion from Fences for Life says.

“Everybody wants to show on the television the wall, but you have to remember this wall is against shooting. It’s only in places where people live very close to the fence and they can shoot through then you have to put up the wall.”

However, Ray Dolphin, the author of the book The West Bank Wall – Unmaking Palestine, says that while a fence may have less visual impact, it takes up more ground and causes greater damage to the environment.

In many cases, Israelis have taken land near the wall that had been passed down through generations of Palestinian families, some such as Abu Akram’s who had spent all their lives farming in ad-Daba.

“When the wall came, they bulldozed a road through my field … my olive trees were destroyed,” he says.

If you go around and ask most villagers in the area, the wall is forcing them into economic ruin.

“It is driving people to despair because there is no livelihood for people in rural communities,” Dolphin says. “When only 200 out of 10,000 [people] can get regularly to their land, obviously you can’t call it an agricultural village any more.”

“If I want to go to the far part, I have to be issued with a permit from the checkpoint and be escorted by a policeman and the settlement security officer to let me pass through a second gate into my land,” the farmer says.

“They close it behind us and we wait for them to open it later.”

As long as Palestinians suffer economic hardship, it could be argued that there will never be peace with the Israelis, yet, it is also argued that the wall exists to protect the economy, albeit the Israeli economy.

“From 2001 to 2003 Israel lost almost four per cent of its GDP,” Shaul Arieli, a former border negotiator, says.

“We know what was the situation in those years. No one goes to see even a movie in Israel. No one used the buses in Israel, because of the security situation.”

The International Court Of Justice in the Hague deemed the wall’s route to be “illegal” and inhumane.

“If the wall was to be built on the green line, which is the internationally recognised line between the West Bank and Israel, they would be no problem with that,” Dolphin says.

“The legal and humanitarian problem is that it goes so far into the West Bank, and there will be 50,000 Palestinians on the Israeli side upon completion, and this undermines the security argument.”

Soffer says the revulsion expressed by many around the world, especially in Europe, is sheer hypocrisy.

“We are not Europe, and even in Europe they create walls, they don’t tell you but you go to Gibraltar or to Malaga, to Ceuta in Morocco … what are they doing, these bloody Europeans? They’re building walls and criticise me.”

But even within Israel, there are many who believe that the wall is not serving any useful purpose.

Yael Dayan is the deputy mayor of Tel Aviv and the daughter of Moshe Dayan, the Israeli hero of the 1967 war in which Israel annexed the West Bank.

She believes the wall is not the answer.

“It’s not a peaceful partition,” she says.

“It became a political statement and adds very bad deep feelings of additional occupation and also internationally speaking it doesn’t have legality from anybody from these places where it splits the population.”

Some Israeli commentators see the wall as an attempt to define, in wire and concrete, a future “two-state solution” by including within Israel land from the Palestinian West Bank on which illegal Israeli settlements have been built.

And it is the settlers who stand to gain most from the wall, according to the economist and author Akiva Eldar.

“It is a kind of settlers’ wall,” he says. “They have adjusted the wall to the reality on the ground, the reality that the settlers have dictated with the full support of the government for many years.”

Many Palestinians too believe the real purpose of the wall is annexation and like all partitions, Israel’s wall both excludes and encloses.

The hardship which it would cause the excluded, the Palestinians, was predictable, but many Israelis now worry about what the wall has done to them, the enclosed.

But it continues to grow, and in the present political climate it is difficult to see a time when it will be dismantled. Those on the extremes feel that this is a good thing. 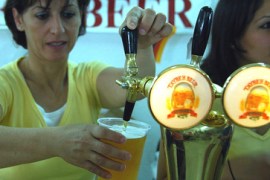 Struggling to ferment a future