The dead and another man and woman that were injured were taken to Baghdad’s Al-Kindi Hospital, a medical source said.
Masked gunmen
A US military spokesperson confirmed that US-led forces had fired on a minibus in Baghdad.
In an statement to the AFP news agency, the military said: “The bus was travelling on a street that is off-limits to vehicles other than passenger cars.
“Initial reporting indicates that two passengers were killed and four wounded.”
Al-Shaab is the same neighbourhood where masked gunmen reportedly killed 11 relatives of a journalist critical of the Iraqi government on Sunday.
‘Family slaughtered’
The Iraqi interior ministry denied that the relatives of Dhia al-Kawaz, editor of the Jordan-based Asawat al-Iraq news agency, had died.
Al Kawaz, who was associated with Saddam Hussein’s party and critical of the Iraqi government, was in Jordan when his sisters, their husbands and children were reportedly killed in the district.
The media advocacy group Reporters Without Borders said Iraqi police at a nearby checkpoint had failed to intervene as the family was slaughtered.
Interior Ministry spokesman Abdul-Karim Khalaf denied the reports saying, “The killing of the 11 family members did not take place and that is totally confirmed.”
Source: News Agencies 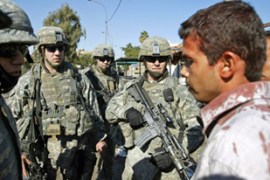 Blasts cause carnage in Baghdad

At least 12 people are killed and scores injured in a spate of bomb attacks. 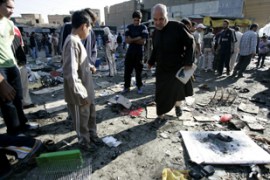 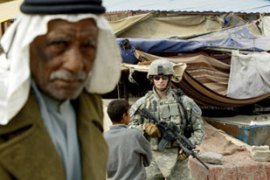