The storm’s arrival came as officials warned residents to brace themselves for several days of bad weather, with tropical storm Hagibis expected to return a week after it first swept through the country, leaving at least 10 people dead.

Hagibis is now expected to hit the western province of Palawan by early on Tuesday, possibly merging with a third storm that is also heading for the archipelago.

“We will continue to have stormy weather for the whole week,” said chief weather forecaster Nathaniel Cruz.

As Mitag hit on Sunday, Philippine troops were placed on heightened alert and told to “undertake all precautionary and preparedness measures” to assist victims, the Philippines civil defence office said.

Nearly 300,000 people were evacuated across six provinces as the government sought to mitigate the risk of flash floods and deadly landslides of volcanic debris.

Many of the evacuations took place in the heavily populated central Bicol region, which ultimately escaped the worst of the storm.

Last year more than 1,200 were killed and 200,000 left homeless after super typhoon Durian hit the region.

The evacuation before Mitag was one of the country’s largest such operations in recent years. 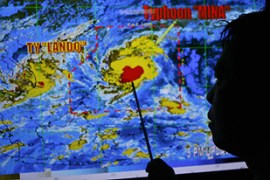