Hundreds of relatives of US crew members had flown to Hong Kong to celebrate Thanksgiving on Thursday.

Later in the day, China appeared to have relented, announcing the carrier would be allowed to stop by Hong Kong after all.

“We have decided to allow the Kitty Hawk to stay in Hong Kong during Thanksgiving,” Liu Jianchao, the foreign ministry spokesman, told a news conference.

“It is a decision based on humanitarian considerations only.” 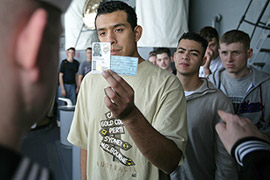 But a spokesman for the US Pacific Fleet in Hawaii told Reuters news agency that the ships were not heading back to Hong Hong and were on course towards the Kitty Hawk’s base in Japan.

He said he was not in a position to say why the ships did not head to Hong Kong after the Chinese reversal or if a turnaround would have been too late.

“When they were refused entry they began heading back and that remains the situation,” he said.

Since the Vietnam war Hong Kong has been regular port of call for US sailors on rest and recuperation.

However, since the return of Hong Kong to Chinese rule in 1997, US ships have had to have permission from Beijing and occasionally China has barred visits in retaliation for disputes.

China‘s move comes just weeks after a visit by Robert Gates, the US defence secretary, who said he hoped the trip would lead to a long-term dialogue.

But Beijing has been miffed by US plans to sell Taiwan a $940m upgrade to its missile system as also a meeting last month between George Bush, the US president, and the Dalai Lama, the Tibetan Buddhist leader whom China considers a dangerous separatist.

Explainer: What is the Delta Plus variant of COVID-19?