Earlier this month police used tear gas and chemical-laced water cannon to break up a protest calling for electoral reform.

Ethnic Indians form about seven per cent of the Malaysian population and the protesters say they are given a raw deal by the government.

The Malaysian government has laws which favour the Malay Muslim majority, and many ethnic Indians feel that they are not represented properly.

Al Jazeera’s Hamish MacDonald who was on the streets of Kuala Lumpur on Sunday morning said police fired water cannons and dozens of rounds of tear gas into the faces of the protesters, turning the demonstration into a street battle.

The protesters on Sunday had planned to hand over a petition at the British High Commission, because they feel that problem has its roots in the colonial era when Malaysia was a part of the British empire.

A lawsuit filed recently by the Hindu Rights Action Force (Hindraf) is seeking $4 trillion in compensation from Britain for the estimated two-million ethnic Indians whose ancestors were brought over to Malaysia as labourers in the 1800s.

Organisers had promised the rally would be peaceful, but the Malaysian government obtained a court order banning the protest, saying it risked inflaming ethnic tensions.

On Friday police arrested three leading members of Hindraf, charging them under Malaysia‘s colonial-era Sedition Act for making what the authorities called seditious speeches at a recent rally.

In the run-up to Sunday’s protest police had imposed roadblocks across Kuala Lumpur and on major highways leading to the city.

Nonetheless the demonstration drew thousands of protesters, many of whom travelled from other cities in Malaysia in defiance of official warnings to stay away.

Estimates put the number of protesters at more than 10,000 and protest organisers say more than a hundred were arrested as the police moved to break up the demonstration.

Some of the protesters carried pictures of India‘s independence leader Mohandas K. Gandhi while others had banners that read “We want our rights”.

“We do not support street demonstrations,” he said in a statement.

“We have been working within the system to resolve the problems faced by the Indian community.” 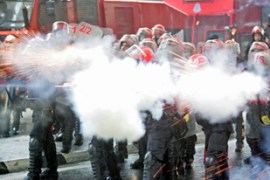 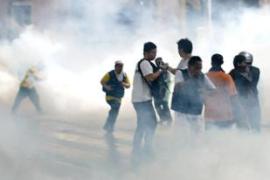 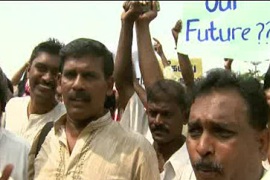