Attempts by aid workers to deliver critical supplies and medical services to those affected by Cyclone Sidr were already hampered after roads and communications routes were blocked or destroyed by debris from the storm.
The US navy was assisting in the relief efforts, with the USS Kearsarge, carrying about 20 helicopters and relief supplies, docked off the country’s coast.
Another ship, the USS Essex, was due to arrive soon, US embassy officials said.
Officers were dispensing medical assistance from a clinic aboard the Kearsarge, said Lieutenant-Colonel Main Ullah Chowdhury of the Bangladesh army.
Relief efforts intensified
Cyclone Sidr killed more than 3,100 people and destroyed more than 450,000 homes and many survivors remain without adequate aid nine days later.

Despite intensified relief operations by the government and local and foreign groups, thousands of survivors hoping for food were crowding river banks and roadsides, witnesses said.

Bangladesh’s army chief on Sunday called for co-ordination in relief operations.
“Please co-ordinate with us, so that we can dispatch your relief goods to the survivors who need it most,” General Moeen U Ahmed told local donors.
Heather Blackwell, Bangladesh representative of British charity Oxfam, acknowledged that “co-ordination among relief distributors is a problem”.
Economic impact
Bangladesh’s interim finance minister said the economic impact of the cyclone was “huge”, but that it was too early to estimate the extent of the damage to the country’s economy.
“The economic loss of the cyclone is colossal. We are still counting,” Mirza Azizul Islam was reported by the AFP news agency as saying.
“Millions of people have been badly affected. No doubt its impact will be huge on the economy.”
The cyclone follows floods in July and August, while a state of emergency declared in January and the interim government’s subsequent corruption crackdown have already eroded business confidence.
Bangladesh’s $69bn economy had been forecast to grow at as much as seven per cent in 2008, but even before the floods the central bank revised that figure down.
The Bangladesh think-tank, the Centre for Policy Dialogue, gave an initial damage estimate of more than $1.5bn
Source : News Agencies 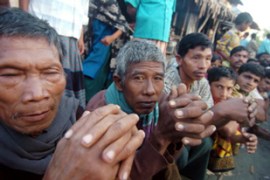 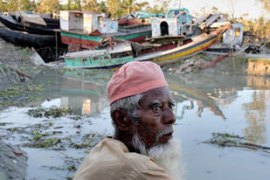 Officials say relief aid finally getting through to some of the more remote areas. 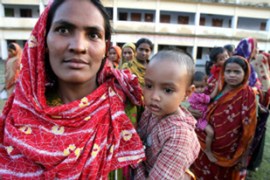