Uribe last week cut Chavez out of his role as mediator in negotiations with Farc rebels over releasing hostages taken during Colombia’s civil war.
Uribe had last weeks accused Chavez of overstepping his bounds and publicly disclosing elements of private talks.
But in a televised speech on Sunday, Chavez accused Uribe of lying.
“They issued a statement yesterday filled with lies, and that is serious, very serious. President Uribe is lying, and he’s lying in a shameless way.”
Chavez appeared to be referring to Colombia’s statement on Saturday saying Chavez had been pushed out of the talks for speaking directly with a Colombian general about hostages despite an agreement with Uribe not to do so.
For months, Chavez had sought to persuade Farc rebels to release about 50 hostages, including Ingrid Betancourt, a French-Colombian politician, and three US defence contractors held for years in secret jungle camps.
Commerical ties
Chavez on Sunday warned his cabinet ministers they had to be “on alert” over commercial ties with Colombia, Venezuela’s second-largest trading partner.
“Everyone should be on alert with respect to Colombia,” he said. “The companies that Colombians have here, the companies we have over there, commercial relations – all of that will be damaged.”
Chavez made a similar threat this month about Spanish businesses after a diplomatic spat caused by Spanish King Juan Carlos telling Chavez to “shut up” during a summit in Chile.
He also briefly cut commercial ties with Colombia in 2005 after bounty hunters snatched a Colombian guerrilla from Venezuelan soil without consulting the Chavez government, sparking the worst diplomatic flap between the countries in years then.
‘Gringo pressure’
Although the two have co-operated on energy projects and fostering commercial ties, the conservative pro-Washington Uribe and the leftist anti-US Chavez have had their diplomatic spats.
Chavez has frequently criticised Colombia’s participation in the US-backed Plan Colombia counter-narcotics programme, which he has described as Washington’s effort to maintain a military presence in Latin America.
“I’m sure he [Uribe] didn’t want to continue in the [hostage negotiation] process; the gringos pressure him a lot,” Chavez said, using slang to refer to Americans.
Piedad Cordoba, a Colombian senator and dialogue facilitator, was also asked to stop participating in the negotiations.
Source: News Agencies 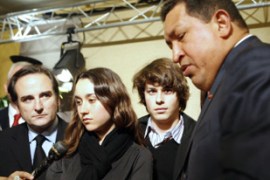 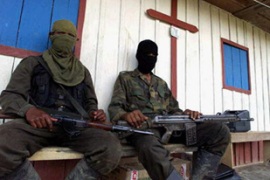