The arrests came after activists from the left-wing National Bolshevik party, a member of the Other Russia opposition coalition, broke through police lines and marched down a main Moscow avenue.

They were quickly joined by activists and leaders from other opposition groups who headed towards the offices of the central election commission where they wanted to deliver a petition protesting over the fairness of the upcoming vote.

About half a dozen other activists were also arrested at the same location.

In a statement ahead of Saturday’s march, the Other Russia group acknowledged that the Moscow municipal authorities had not given permission for the planned march but said the group planned to go ahead with it anyway to protest against December 2 elections for the state Duma.

They said the elections to the lower house of the Russian parliament would be neither free nor fair.

Prior to the march and Kasparov’s arrest, around 2,000 supporters of the Other Russia held a rally where they were joined by Boris Nemtsov, the leader of the Union of Right Forces (SPS), a liberal opposition party.

“Putin is a coward. We elected a coward. He’s afraid of peaceful people,” said Nemtsov, as hundreds of riot police stood by on a deserted street near the centre of the city.

He also said that intimidation from the authorities limited the number of people present,

Nemtsov was nominated on Friday by the SPS as the party’s candidate for the presidency.

Hours ahead of Saturday’s demonstration, police raided an office housing the website of the Other Russia, a spokeswoman said.

On Red Square, around 2,000 members of the youth group Nashi rallied to show their support for  Putin.

Many were holding white balloons which they said were intended to symbolise the “airheads” of the opposition. “

These are our rivals,” said Sasha Isayev, 20, pointing to his balloon.

“They are stupid and ridiculous opponents.” 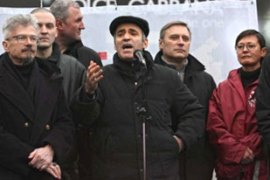