Sharif will be joined by his wife Kulsoom and Shahbaz in Saudi and they will perform a pilgrimage to Mecca before taking the flight to Lahore, the capital of Punjab province and power base of the Sharif family.

Both brothers went into exile a year after the 1999 coup.

Buoyant supporters
“God willing, he will return in a few days,” said Raja Zafar-ul-Haq, chairman of the Pakistan Muslim League(N) headed by Sharif.
Musharraf has been under intense criticism at home and abroad for imposing emergency rule three weeks ago.
He has reportedly agreed to Sharif’s return after discussions with King Abdullah during his recent visit to the kingdom, said a leader of PML(N).
Overnight the Commonwealth suspended Pakistan’s membership of the grouping of mostly former British colonies.

The move underlined the pressure Musharraf has been under since invoking emergency powers to shore up his presidency.

On Friday, Gordon Brown, the British prime minister, told reporters at a Commonwealth summit in Kampala that “Pakistan has got to end the state of emergency, General Musharraf has got to remove his uniform to fight elections.”
He said the commonwealth suspension would be lifted if freedom for the press and judiciary was established in Pakistan.
Pakistan has deplored the suspension, saying it was “unreasonable”.
Saudi ‘complicity’
Diplomats say Saudi Arabia has been embarrassed by its complicity in Sharif’s exile and wants the situation resolved.

Musharraf imposed a two-term limit on prime ministership in 2002, which currently bars both Sharif and opposition leader Benazir Bhutto from another stint.

Bhutto has previously said she has been in negotiations with other political leaders, including Sharif, to form a united opposition front agaisnt Musharraf.
Musharraf co-opted some members of Sharif’s Pakistan Muslim League after ousting him.
The Pakistan Muslim league now has two factions.
The Karachi stock market rose 1.4 per cent after news of Sharif’s possible return spread amid speculations that the state of emergency imposed by Musharraf on November 3 would be lifted soon.
Musharraf is expected to quit as army chief and be sworn in for another  five-year term as a civilian president.
Source: News Agencies 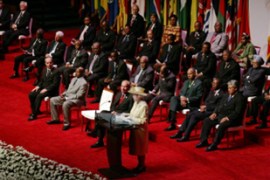 Islamabad labels as “unjustified” a decision to drop it from the Commonwealth.