The issue of the proposed missile shield and its basing of key facilities in eastern Europe has been the focus of growing tensions between Washington and Moscow with Putin warning that it could spark a new arms race.

Last month Putin told reporters in Portugal that the growing tensions over the shield were comparable to the 1962 Cuban missile crisis, when US and the Soviet Union came to the brink of nuclear war.

Key parts of the proposed shield include the installation of a radar system in the Czech Republic and the basing of missile interceptors in Poland.

Both countries are part of the former Soviet bloc, but have since become members of Nato.

Washington says the planned shield is intended to counter Iranian missiles that could be aimed at Europe or US territory, but Russia argues that the system could also be used against Russian missiles.

As a result, Moscow says, the shield constitutes a threat to its nuclear deterrent.

The Russian president’s latest comments came after the foreign ministry in Moscow said it had received details in writing of Washington‘s latest proposals on the shield and was studying them.

US officials have said the latest offers included delaying activation of the system until Washington and Moscow agreed on “definitive proof” of missile threats, as well as posting Russian liaison officers at the US missile sites.

The US moves are aimed at discouraging Moscow from pulling out of a key European arms control treaty.

The offers from Washington had been discussed in earlier negotiations but the Russians had reportedly insisted on seeing them in writing before further talks could take place.

The US proposals reportedly include: 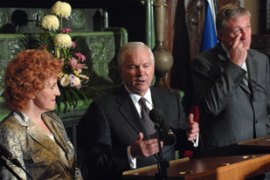 US may delay missile shield plan

Defence secretary says activation might wait until threat of attack is proven. 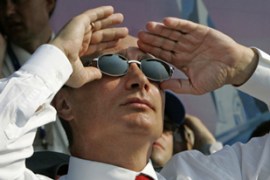 Putin hits out at US missile shield