It is the third death among the 900 Australians in the Nato-led International Security Assistance Force (Isaf).

Isaf said two women and a child were also killed in Friday’s early morning clashes but it was not clear how they had died.

Abdul Hakim Jan, a police commander in charge of  several posts in the Arghandab area of Kandahar province, said: “They killed seven of my policemen and took with them the  remaining six.”

Yousuf Ahmadi, the main Taliban spokesman, confirmed his group was involved but said 12 policemen had been “slaughtered”.

More than 700 policemen have been killed in attacks this year, most of them by the Taliban who regrouped soon after being driven from power in 2001 in a US-led invasion.

A large force of Taliban also overran the district centre of Gulistan in the western province of Farah on Friday, capturing it for the second time in less than a month, the provincial governor said.

Mohaiyudin Baluch said: “Since the Taliban were numerous, police could not resist and  after a short exchange of fire, police withdrew from the district.

“So far this is the second time that Taliban have captured Gulistan district and the reason is that police are not properly equipped and they are in poor numbers in Farah districts.”

He said there had been no casualties.

The rebels first took Gulistan on October 29, killing seven civilians and a policeman.

Afghan and Isaf forces drove them out 10 days later. 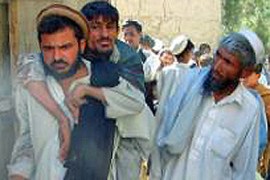 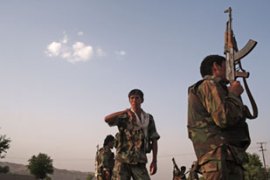