“The federal and provincial governments have released 3,400 people including political workers and lawyers,” Javed Cheema, interior ministry spokesman, said on Tuesday.
“Some 2,000 remain in detention. They will also be released soon.”
Cheema said “very few” prisoners would be left, who would face criminal charges and bail applications for release.

The prisoners were arrested after protesting against emergency rule imposed on November 3.

The majority are lawyers, rights activists and members of opposition parties.
The government killed 18 pro-Taliban fighters in northwest Pakistan on Monday, with a major operation to follow on Tuesday.
Saudi visit
Tuesday’s mixed signals from the government came as Pervez Musharraf, Pakistan’s president, began a visit to Saudi Arabia.
It is his first foreign trip since he imposed the state of emergency and comes a day after Pakistan’s supreme court – made up of lawyers handpicked by Musharraf – dismissed the five main challenges to his re-election in polls confirmed for Jaunary 8, 2008.
Musharraf is unlikely during the two-day visit to meet Nawaz Sharif, his political foe and former Pakistani prime minister, who lives in Saudi Arabia.
“He will be going for a bilateral trip to discuss economic co-operation and security issues. No meeting with Sharif is on the agenda,” a senior Pakistani government official said.
However, Al Jazeera’s has learnt that General Nadeem Taj, Pakistan’s military intelligence chief, met Sharif in Jedda on Monday.
Tribal fighting
Meanwhile, attempts are being made to stem fighting between rival Sunni and Shia tribes around the town of Parachinar, west of the capital Islamabad.

At least 112 people have died and 300 more have been injuried in clashes in villages near the town, tribal administration officials said.

A 16-member tribal peace delegation has been sent to the area which has deep tribal and religious tensions and plentiful weapons supplies.
Major-General Waheed Arshad, Pakistan’s chief military spokesman, said on Tuesday that the situation in Parachinar was “stable”.
In villages around the town, residents and local officials said that three people died in continued clashes on Tuesday.
Swat valley exodus
On Pakistan’s other hotspot, thousands of people are fleeing a scenic valley after security forces warned them to leave in advance of a major operation against pro-Taliban fighters, witnesses and officials said on Tuesday.
Helicopter gunships and artillery killed two fighters and wounded another 15 when troops targeted their vehicle near the town of Alpuri in Swat valley’s Shangla district, residents said.
Eighteen fighters were killed on Monday in this area of northwest Pakistan.
Four civilians were killed when a mortar bomb hit their residence as security forces pounded fighters’ positions in the same district, witnesses said.
The Pakistan military has said 15,000 troops will soon launch a major offensive in Swat.
Source: News Agencies 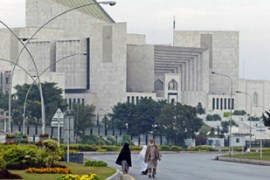 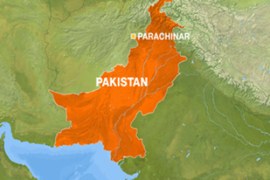