The pamphlet, attributed to a bogus Muslim group, had encouraged voters to back Labor, saying the party wanted convicted Indonesian terrorists forgiven for the Bali attacks.

“We gratefully acknowledge Labors (sic) support to forgive our Muslim brothers who have been unjustly sentenced to death for the Bali bombings. Ala Akba (sic),” it said.

The pamphlets, purportedly issued by a group called “The Islamic Australia Federation” and carrying Labor’s logo, had been distributed overnight in a key marginal constituency in Sydney, apparently by activists from Howard’s Liberal party.

On Thursday, a day after the scandal first broke, the Liberal party said two members implicated in distributing the pamphlets had been expelled.

Seeking to quickly distance himself from the furore, Howard said it was “wrong and unfair and dishonest” to suggest that Labor was sympathetic to the Bali bombers.

“That sort of material should never have been distributed,” Howard told Australian Broadcasting Corporation radio on Thursday.

“It was not authorised by the Liberal party; it is no part of our campaign.”

At a subsequent press conference he appeared increasingly frustrated with the issue.

“What more can I do? I have condemned it, I’ve disassociated myself from it. I think it’s stupid, it’s offensive, it’s wrong, it’s untrue. I mean for heaven’s sake get a sense of proportion,” he said.

The damaging row looked likely to overshadow a televised address to the nation by Howard later on Thursday.

Australia‘s main Islamic group, the Australian Federation of Islamic Councils, condemned the pamphlet as a “despicable” injection of racism into the six-week election campaign and called for a police investigation.

“My first reaction was ‘oh no, not again, not the Muslims again’,” Ikebal Patel, the organisation’s president, told ABC.

“This election so far has been fairly good in that the issue of migration, the issue of Muslims has not really been a major factor.”

The Labor party meanwhile has accused Liberal leaders of a last-ditch dirty tricks campaign as it fights to hold on to vulnerable constituencies.

On Thursday, Kevin Rudd, the Labor Leader, called on Howard to explain who in the party had been aware of the campaign.

“This says everything about the desperate and desperation politics on the part of the Liberal party on the eve of the election,” Rudd told Adelaide radio 5AA.

The case itself has been referred by both the Liberal and Labor parties for investigation by the election authorities. 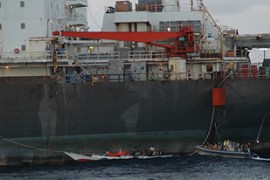 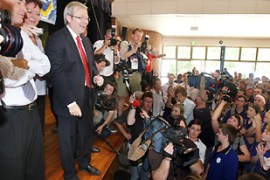 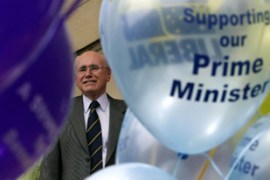