Dadullah, the Taliban’s senior military commander, died in clashes with Afghan and US-led forces in Helmand province in May.

Pakistani security forces have been involved in a number of clashes in Baluchistan several movements are demanding greater autonomy for the region and improved benefits from the area’s mineral wealth.

“This will come as a major blow to the Baluch Liberation Army and already we are seeing protests in the provincial capital, Quetta, at that news,” Hyder reported.

The BLA said it carried out the bombing of a crowded market in Quetta in 2004, which killed 11 people and injured 27 others.

The Pakistani army has also clashed with Taliban and al-Qaeda fighters in the province in recent years.

The increasing threat of attacks by anti-government groups in provinces along the Afghan border was cited as one reason by Pervez Musharraf, Pakistan’s president, for imposing a state of emergency. 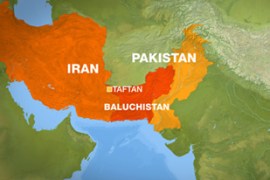 Iran to wall off Baluchistan border