What are the root causes of tension in Lebanon today?

There is no single root cause to the current political discord that has affected all of Lebanon, but the mistrust that fuelled the 1975-1990 civil war, which resulted in the deaths of 100,000 Lebanese, arguably remains.

There are 18 officially recognised religious communities in the country, including Shia and Sunni Muslims, Druze Muslims, Maronite Christians and Greek Orthodox. The Lebanese constitution ensures official representation for these groups.

Political power is distributed along religious lines, with parliamentary seats divided between Muslims and Christians. Prior to the 1975-1990 civil war, the ratio of Christian seats to Muslim seats favoured the Christian population 6 to 5, in proportion to Lebanon’s last census in 1932.

Accordingly, the presidency was reserved for a Maronite Christian, the prime minister’s office for a Sunni Muslim and the post of house speaker a Shia Muslim.

However, over time, shifting demographics led to demands from Shia and Sunni groups that the ratio of seats be changed to reflect the rising Muslim population. The Shia population grew particularly in the decades after the 1932 census.

The 1989 Taif agreement, which effectively put a end to the Lebanese civil war in 1990, reassessed the balance of parliamentary seats to a 50:50 ratio. The powers of the two senior Muslim-reserved posts (prime minister and house speaker) were boosted, as a check on the power of the Maronite president.

That are the demands of the political parties in the current standoff?

The parliamentary majority bloc, called the March 14 Forces, led by Saad al-Hariri is being strongly opposed by an alliance domianted by Hezbollah and its partners.

The political opposition seeks greater representation in cabinet, to the extent that it can possess an effective veto on key cabinet issues.

The March 14 alliance refuses to give way to this demand, saying it has a clear majority and that giving a veto to the opposition would result in a political deadlock.

The opposition pulled their ministers out of the cabinet led by prime minister Fouad Siniora in November 2006, calling for a new government of national unity or fresh elections. Lebanese politics has been in paralysis since.

Supporters of both sides have taken to the streets in the past months and on occasion things have turned violent.

An opposition encampent set up in December last year in Martyrs Square in central Beirut is still being manned by supporters who say they will not leve until Siniora’s government steps down.

Why is the veto so important to the opposition?

The Hezbollah-led opposition says the veto is important because without it the March 14 alliance is able to pass its own decisions due to their majority in the national assembly, regardless of the opposition’s position on each issue.

The opposition says veto rights would ensure near consensus on national issues. The majority has consistently refused to this demand.

With the prospect of a national unity cabinet all but exhausted, the opposition is currently trying to get its chosen candidate candidate installed as president.

The current problem is that March 14 camp and the opposition cannot agree on a consensus candidate for a replacement to Emile Lahoud, Lebanon’s president.

The majority argues that because it should be able to vote in parliament for the candidate it wants, and not one that is agreeable to the opposition.

Meanwhile, the opposition refuses to send its members to parliamentary sessions to elect a president until a consensus candidate is agreed by both sides.

Time is running out for a candidate to be agreed, as Lahoud’s mandate ends on November 24. There beckons the prospect of two rival administrations being set up, with two presidents.

Are the opposition and majority respectively opposed to the US and Syria?

It is not quite as simple as that. While it is true that key figures in the March 14 Forces, such as Saad al-Hariri and Fouad Siniora, the prime minister, are supported by Western powers, those governments are just as keen to form diplomatic relations with Syria, mindful of maintaining Lebanon’s character and sense of brotherhood with its Arab neighbours.

As for Lebanon’s political opposition, Hezbollah is certainly no friend of the West – a feeling reciprocated by the US, which has the Shia organisation on its list of terrorist groups.

However, although Hezbollah receives substantial support from Tehran and Damascus, two regimes currently maintaining far from warm relations with the US, the group says its decisions are made independently.

Meanwhile, the Free Patriotic Movement, the key Christian party in the opposition, is led by Michel Aoun, a man who is certainly no friend of Syria after their troops forced him from the presidential palace in the last days of the civil war.

It is simplistic to characterise the two sides of the Lebanese political divide as wholesale allies or proxies of the US or Syria. 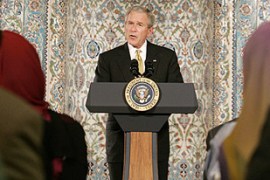 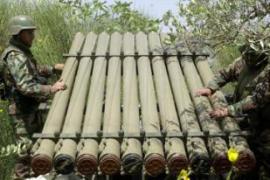