Chavez said: “Ingrid is alive, I am sure of it.”

Betancourt was running for president when she was abducted in 2002 along with Clara Rojas, her campaign manager, on the campaign trail.

She was spirited deep into the Colombian jungle and is currently in the custody of the country’s biggest rebel group, FARC (Revolutionary Armed Forces of Colombia).

The last time Betancourt was seen publicly was in a video statement from 2003.

Posters with Betancourt’s photo have adorned France’s city halls and some top French musicians have performed concerts to keep her plight in the public eye.

Ideological differences divide Chavez, a socialist, and Sarkozy, a conservative who has strived to mend France’s relations with the US.

Nevertheless, Chavez’s new willingness to act as negotiator and the May election of Sarkozy have breathed new life into the Betancourt family’s struggle.

Chavez acknowledged on Monday that he has yet to receive proof from FARC that the hostages are alive.

“Let’s wait for the proof,” he said. “I have a lot of faith that they’re alive.”

Chavez said Manuel Marulanda, FARC’s commander, had told him to take a message to Sarkozy that Betancourt “is being treated well”.

“I trust in Marulanda’s word,” he said.

Chavez emerged as a negotiator in Colombia’s long-running conflict, in part because FARC rebels express an affinity for his leftist ideals, and because he has cordial ties with Alvaro Uribe, the US-allied Colombian president – despite deep ideological differences.

FARC has demanded that two Colombian rebels imprisoned in the US be included in any prisoner swap. One of them, Ricardo Palmera – or Simon Trinidad – is to be sentenced by a judge in Washington, DC, on Tuesday for the kidnapping of three Americans in Colombia.

Another, Nayibe “Sonia” Rojas, was convicted this year by a US court of exporting cocaine.

The Colombian government has set a time limit of no later than December for Chavez’s efforts.

By setting the deadline, Uribe’s government indicated a diminishing patience with what many Colombians see as a public spectacle by Chavez. 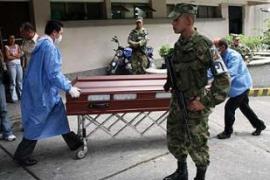 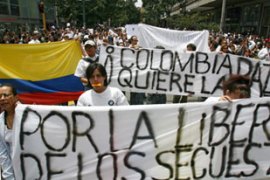 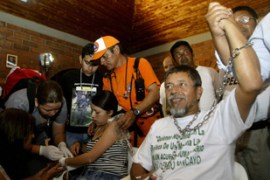 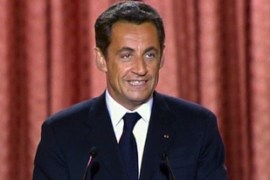