As Turkey continues to wage a war of attrition against the Kurdish Workers Party (PKK) based in Iraq, a new generation of young nationalists are growing increasingly aggressive towards the country’s Kurdish minority.

Abdullah Batalak, a 15-year-old student, left school during his lunch break and joined one of the many anti-PKK demonstrations which erupted around the country following the latest border incursions.

“Get the militants out of parliament,” he shouted, referring to the pro-Kurdish Democratic Society Party (DTP) that gained seats in parliament when it ran on the independent ticket during last July’s elections.

Ayse Karabat, a columnist at Todays Zaman newspaper, is concerned that such sentiments are penetrating schools and creating new divisions in Turkish society on how to approach the Kurdish issue.

She told Al Jazeera: “My daughter came home excited about a demonstration being held at her school. She talked about her friends waving flags and chanting that martyrs are immortal, the country is indivisible, and sadly about students teasing their Kurdish classmates.”

Karabat admits that Turks have a right to feel angry about the recent attacks but fears this is creating new divisions in society. She said the pain suffered by Turks who have lived with terrorism for many years can easily pass on to their children.

“There are rumours that in some neighbourhoods people are making lists of their Kurdish neighbours. And shops owned by Kurds are being labelled as the places to stay away from.”

Daily images of crying mothers surrounded by hundreds of mourners at the funerals of soldiers killed by PKK rebels broadcast to millions of households have fanned tensions as Turkey mulls a full-scale invasion into Iraq.

Hoping to stem public anger, the Supreme Board of Radio and Television (RTUK), Turkey‘s television watchdog, banned all broadcasts covering the deaths of the Turkish soldiers

Although censorship in Turkey does not exist, the prime minister’s office can prohibit broadcasts “in situations in which national security clearly requires it or in which public order is likely to be disrupted”.

The ban, described by members of the media as dictatorial and overturned by the highest administrative court after a few days, has left Turkish journalists pondering over the role and responsibility of the  media in keeping peace.

Melis Senerdem, editor at Fortune magazine Turkey said: “The ban was somewhat absurd because people could get on the internet and see the same images. However, certain media outlets have continuously been pumping up the public with these images.”

But more than the media, the nationalist upsurge could be traced to the country’s past.

Turkey‘s political culture has always been dominated by nationalist rhetoric.

Murat Paker, assistant professor of psychology at Bilgi University in Istanbul, told Al Jazeera: “The political culture in Turkey which is dominated by nationalism is prone to producing these types of reaction. It is a very dangerous situation indeed. We could hear at any moment a massacre against Kurds, and the government is not doing much to calm this reaction.”

Paker’s fears are already coming true with rhetoric being translated into sporadic acts of violence.

The violence may be the result of a series of missed opportunities to bring about political and cultural reconciliation between Turkish and Kurdish societies.

Paker attributes that to the feeling of triumph expressed by Turkey‘s nationalists when Abdullah Ocalan, the PKK leader, was captured in a commando raid in 1999.

“They identified the Kurdish issue with the PKK issue and categorised it one of security and didn’t think about solving this issue politically,” he said.

In the 1990s, Kurdish politicians were arrested after speaking in their native language in parliament.

In 2007, key strides were made. For the first time in over a decade, Turkey‘s Kurdish communities gained representation in parliament after 20 Kurdish deputies won seats in elections held in July.

At the time, the electoral gains were seen as a huge step forward on the Kurdish issue.

Elif Kaya, manager of the Kurdish Mezopatmya Culture Centre in Istanbul said: “Kurdish politicians were nicknamed ‘Candidates of a Thousands Hopes’ in the run up to the elections. Kurdish politics has matured from the early 1990s.”

But the recent Turkish military forays into northern Iraq to rout out PKK fighters may have brought to a halt any chance of political reconciliation. Distrust between the two groups have increased instead.

Atilla Yesilada, a Turkish analyst at Istanbul Analytics think tank, said: “The DTP has unfortunately adopted a stance that is closer to the PKK than the government.

“They have not denounced the PKK as a terrorist organisation. This is very sad because when you seek representation for so long you would hope that you would use it for the benefit of both ethnic groups.”

But some analysts question why the PKK chose to step up attacks within Turkey at a time when Kurds were making political gains.

Paker told Al Jazeera: “The PKK is losing its power base. It’s recent actions are bad for the DTP and are marginalising their politics. At the same time AKP have been making economic and social contributions to the region in the south east where many Kurds live.”

The AKP was returned to power in July elections with an overwhelming 47 per cent of the vote and many of Turkey‘s Kurds living in the south east voted for the ruling Justice and Development Party.

Ilter Turkmen, a former foreign minister, also feels that the PKK is losing its powerbase.

“The PKK is not as strong as it was in the 1990s and is trying to reassert its power,” he told Al Jazeera.

Young Turks for the moment are disinterested in the reasons behind PKK’s increased militancy. Instead, they are airing their nationalism – sometimes violently – as the country is further polarised.

“We should just clean the south east of the country,” a young Turkish demonstrator, who refused to be named, said as his friends punched their fists in the air. 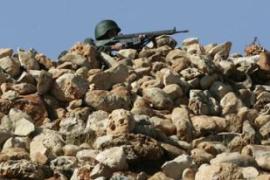 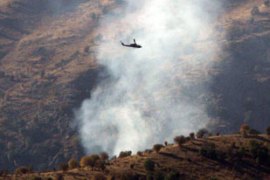 Turkey tells US to act against PKK