The three Australians can still appeal against their death sentences.
The gang members were sentenced in 2005 and 2006.
Reactions
John North, a laywer for the Australians, said: “Well, of course we are disappointed. We have a young man on death row who should not be there. And now we only have one option left which is judicial review.”

Alexander Downer, the Australian foreign minister, said before the decision on Tuesday that an appeal to Indonesia for clemency for the nine convicted Australian drug smugglers would come from Canberra after all legal appeal possibilities were exhausted.

“We oppose capital punishment and will do what we can for Australians who are on death row,” he said.
In Indonesia 103 people are currently sentenced to death, more than half of them for drugs crimes.
Awaiting execution
Al Jazeera’s Step Vaessen visited a women’s prison in Tangerang, close to Jakarta, where five women are waiting for their execution.
Edith Sianturi is one of the women who filed the case at the constitutional court, disputing the death penalty.
She was sentenced to death for selling 1kg of heroine.
She did not want to be interviewed but Siti, her cellmate, made a plea to save her life, saying: “They are still so young, they have not been married. They have no families, they all regret what they did. They deserve a chance to improve their lives.”
The constitutional court judges decided otherwise. According to them, the right to be protected against crime is more important than the right to life, Vaessen said.
Source : News Agencies 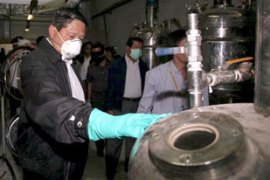 Police say illegal ecstasy factory was one of the largest ever found in Asia.

Tons of drugs and medical equipment sent to Indonesia in response to major disasters is damaged, out of date and unusable, aid workers said.