‘Dead bodies’
The accident is the worst in Ukraine for seven years and has drawn attention to poor safety measures in the industry.
Rescue attempts have been made harder due to the blast affecting the mine’s ventilation system, an official from Ukraine’s work safety authority said.
Oxygen tanks are being used by rescuers, to cope with the continuing fire and methane in the mine.
Vitaly Svetkovsky, a 30-year-old local miner, said from hospital: “I don’t know what happened. I heard a bang and the air started to get hotter.
“The temperature increased sharply and there was so much dust that I couldn’t see anything … so I was moving by touch over dead bodies along the rail track,” Svetkovsky said.
Most of the miners were suffering from methane inhalation, the hospital’s head doctor Yevgeny Gadchuk said.
“They’re in a state of shock,” Gadchuk said.
‘Dangerous’ mines
Family members gathered by the entrance to the mine to get news of relatives.
“I detest these mines,” a weeping woman said as she attempted to find a member of her family.
Ukraine has about 200 coal mines and more than 75 per cent are classified as dangerous due to high methane concentrations.
The gas, a natural byproduct of mining, must be ventilated and its concentration increases with depth.
However, some ventilation systems are outdated officials said.
The Zasyadko mine is one of Ukraine’s largest and employs about 10,000 people. The Donetsk region is the heart of the country’s coal mining industry.
After explosions there in 1999 and 2001, claiming about 50 lives each, and a gas leak in 2006, killing 13 people.
Source: News Agencies 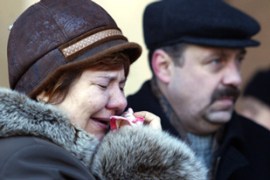 Scores killed in Ukraine mine blast

At least 63 people are killed and 27 injured in gas explosion. 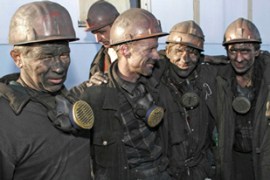 At least 14 miners dead and others unaccounted for after blast in Donetsk mine.