“The rest of the world think they know what is good for all of us,” Ong said a day ahead of the annual summit of the 10-nation group in Singapore.
“What we are saying is please, allow us some democracy of ideas, democracy of option. You are advocating democracy but you are saying your idea is the only workable idea. Is it fair to us?”
US resolution
The US senate unanimously voted for Myanmar’s suspension on Friday.
It asked Asean to consider “appropriate disciplinary measures, including suspension, until such time as the government of Burma [Myanmar] has demonstrated improved respect for and commitment to human rights”.
Barbara Boxer, the Democratic senator who introduced the resolution, said: “It is now time for Asean to back its words with actions.”
However, Ong said he was encouraged by the recent visit of Ibrahim Gambari, the UN envoy, to Myanmar when he attempted to develop a dialogue between the ruling military government and opposition leader Aung San Suu Kyi.
“Let us build on that. The challenge for Asean is to prevent slippage of what Gambari has achieved,” he said.
Ong said if leaders thought they were not being treated equally, they would disengage with the group.
“The Myanmar guys are quite happy to be left alone,” Ong said.
“They are not scared, not afraid of being isolated. They can just shut the door and go into hibernation.”
Leiutenant General Thein Sein, the Myanmese prime minister, will arrive in Singapore for the summit on Monday.
Source: News Agencies 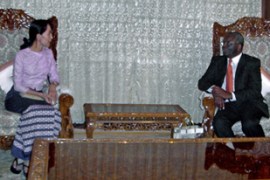