The two parties revealed that they will unexpectedly hold talks on November 26, the first since negotiations presided by a federal mediator broke down and the strike began on November 5.

The negotiations, which began in July, foundered mostly on differences over the writers’ demands for a greater share of revenues from the Internet, widely seen as the main distribution medium for filmed entertainment in the future.

“Leaders from the WGA [Writers Guild of America] and the AMPTP [Alliance of Motion Picture and Television Producers] have mutually agreed to resume formal negotiations on November 26. No other details or press statements will be issued,” a statement said.

The WGA said its 12,000 members would remain on strike for the time being, with picketing to resume next week with a major rally and march along Hollywood Boulevard planned to take place on Tuesday.

In an online message to union members, the WGA West president, Patric Verrone hailed the breakthrough as a result of the union’s resolve.

“This announcement is a direct result of your efforts,” he wrote. “For 12 days I have repeated that a powerful strike means a short strike.”

He added the guild would suspend picketing next Wednesday until November 25, the eve of the next bargaining session due to the Thanksgiving holiday.

The strike is the worst labour crisis to affect Hollywood in 20 years and several late-night talk shows, including those hosted by Jay Leno and David Letterman, have been forced to show repeats of episodes.

Production also ground to a halt on numerous prime-time comedies and dramas and was expected to end on most TV shows was expected by the end of November as work was completed on the last advance scripts stockpiled by the studios in anticipation of a prolonged strike.

The last major Hollywood strike, a 1988 walkout by the WGA, lasted 22 weeks, delayed the start of that year’s autumn television season and cost the entertainment industry an estimated $500 million.

Experts said a strike of similar duration this time would result in losses of more than $1 billion. 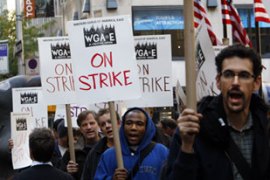 Dispute over DVD and internet revenues set to hit prime-time US television shows.