Owen Fay, Al Jazeera’s correspondent in Bangladesh, said that he witnessed worsening conditions as he travelled from the capital Dhaka to the coastal town of Barisal.
“As we get further and further away from the capital Dhaka and closer the coastal regions… the devastation gets worse,” he said.
“We’ve seen homes and livelihoods completely destroyed. The government is seeing the scale of the storm for the first time and although they say they have a plan in place they did not realise how badly some of these places have been hit.”
Advance warning
A tidal swell from the cyclone devastated three coastal towns and forced the evacuation of about 3.2 million people.

“We are expecting that thousands of dead bodies may be found within a few days,” Shekhar Chandra Das, the deputy head of the government’s disaster management office, said.

“We have not been able to collect information about casualties in many remote and impassable places due to the disruption to communications,” he said.

Officials are optimistic that cyclone shelters and an improved early-warning and evacuation system saved many lives.

About 1.5 million people took refuge in shelters and other government buildings as Sidr swept the across Bangladesh.

The United Nations has pledged several millions of dollars in aid while the European Commission said it is sending $2.2m in emergency relief to Bangladesh.

The storm uprooted trees and felled power lines across the country, with aid officials describing the damage as extremely severe.

The electricity grid failed on Friday and parts of the capital Dhaka were still without power on Saturday.

Suman SMA Islam, Care’s humanitarian assistance co-ordinator in Bangladesh, said the storm was a severe setback to the country months after a storm hit the country’s northern coast.

“Many people are homeless, crops and livelihoods have been destroyed and this is going to put great pressure on the government, the economy, and the people themselves,” Suman said.

Officials from the Red Crescent said about 1,000 fishermen on about 150 boats were still unaccounted for in the Bay of Bengal.

Several endangered species in the Sundurban region may also have suffered as a result of the storm, with forest officials saying that many wildlife could have died.

Sidr lost strength after it hit Bangladesh and passed over the country early on Friday, weather officials said. 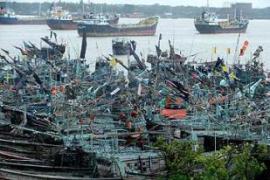