‘Difficult times’
Musharraf said the country was going through “difficult times” after he declared a state of emergency but that Pakistan had progressed since he took power in 1999.

“Certainly the glass is not half full. Certainly we have a thousand things to do. But we have to be proud of the fact that we have made an almost empty glass to the half-full level,” he said.

Musharraf has said that emergency rule was imposed in an effort to crack down on fighters linked to al-Qaeda and the Taliban.

Small protests have erupted across the country and been broken up by police with sticks, but two boys were killed in shooting during a protest by Bhuttsupporters on Thursday.

High-level visit
Meanwhile, John Negroponte, number two to Condoleezza Rice, the US secretary of state, arrived in Islamabad on Friday, marking the first visit by a high-level US official since Musharraf declared the state of emergency.
He arrived from a stop in Africa, where he said that the democratic process in Pakistan had been “derailed”.

“Our message is that we want to work with the government and people of Pakistan and the political actors in Pakistan to put the political process back on track as soon as possible,” Negroponte said.

Sean McCormack, a state department spokesman, said that Negroponte had spoken by telephone with Bhutto on Friday.
McCormack said Negroponte had “reiterated… the importance of moderate forces working together in Pakistan for a better future for Pakistan and also to get Pakistan back on the pathway to constitutional rule.
“He wanted to hear from her a little bit how she viewed the political situation in Pakistan. That is part of what he is trying to get a sense of.”
Musharraf talks
Negroponte is expected to meet Musharraf, as well as other senior officials and opposition politicians, for talks during his trip.
He is not expected to meet face-to-face with Bhutto said McCormack.
His arrival came just hours before the new cabinet was sworn in – and after Bhutto’s release from house arrest in the eastern city of Lahore.

Bhutto, leader of the Pakistan People’s Party, was under house arrest for three days.

Before the arrest order was served, she had planned to lead a protest march from Lahore to Islamabad to protest against emergency law.

Later in the day, Bhutto told a news conference, referring to Musharraf’s party: “This caretaker government is an extension of the PML-Q and is not acceptable.

“We totally reject this interim government. It is unacceptable, it  is biased,” Bhutto said.

“Do we want to deny this nation its true legitimate leadership and make way … for extremist forces?

“The West’s interests lie in a democratic Pakistan.”

Bhutto also said she was in negotiations with other political leaders, including Nawaz Sharif, the exiled prime minister, to try to form a united opposition front.

“I believe it is hard to build a coalition but I will take on the task … I talked to Nawaz Sharif and told him that I am discussing with all leaders the formation of an interim government,” she said.

Kamal Hyder, Al Jazeera’s correspondent in Islamabad, said that Bhutto’s new strategy to ally party with other opposition groups could be a face-saving measure.

“Her credibility was greatly damaged after she made a deal with Musharraf,” he said.

“When she came to Pakistan her party told her she had lost points among the electorate and that the people would not vote for her if she continued with that alliance.

“Therefore she decided to take a U-turn.” 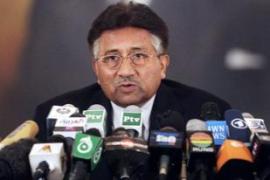 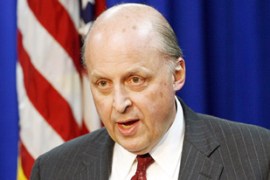