“The issue of transparency: we are inviting any amount of observers to Pakistan to see [the election]. Let them come and see the transparency of the election,” he said.

“What the oppositon is talking about is agitation. They want to disturb law and order and undermine governance.”
The general, who seized power in a 1999 coup and joined the US “war on terror” after the September 11, 2001 attacks in America, has appeared increasingly isolated since he declared an emergency and suspended the constitution on November 3.
Imran Khan arrested
Government forces have rounded up thousands of opposition and human rights activists, purged the courts and blacked out independent TV news channels – giving ammunition for his opponents to brand him a dictator.

On Wednesday, police arrested Imran Khan, the cricketer turned leader of the opposition Tehreek-e-Insaf party, after he rallied students at Lahore’s Punjab University to stand against Musharraf’s emergency rule.

The US and other Western allies have been pushing for Musharraf to step down as army chief and end the emergency, warning that it could seriously undermine the legitimacy of the elections.
Dana Perino, the White House press secretary, said after Musharraf’s comments on Wednesday: “We don’t see how it is possible to have free and fair elections under emergency rule.
“We want to have emergency rule lifted, so that people could protest peacefully, or that they can campaign, and so that a free media can cover the election as we do here.”
Musharraf should return to democracy “as soon as possible”, she said, adding: “We think as soon as possible is now. We’d like to see it done immediately.”
Despite the strong rhetoric, George Bush, the US president, continues to describe Musharraf as a trusted ally and US officials have indicated they will not cut generous aid to Pakistan’s military.

Musharraf said he took “decisions in Pakistan’s interest and I don’t take ultimatums from anyone”.

He said he had originally planned to quit as army chief by Thursday, when his presidential mandate and the term of the current parliament expired, but said he was forced to delay the move until a court ruling on his recent re-election.
He said the exact timing would depend on the reconstituted Supreme Court but expected it to happen within this month.
Under the emergency Musharraf removed the chief justice of the Supreme Court and other judges who were poised to rule on whether he was eligible for a new five-year presidential term.
Musharraf lashed out at Iftikhar Mohammed Chaudhry, saying “interference” by the sacked chief justice, had paralysed the government.
The judge had hauled in top officials to order them to free terror suspects held without charge, sometimes for years.
Boycott fears
The president also lambasted Bhutto, twice Pakistan’s prime minister, for stirring up tensions since her return from self-imposed exile.

He said it was unlikely she could become prime minister for a third time by winning the elections but left open the possibility of working with her if she did.

“We will see. I do function with everyone… It depends on her if she wants to be on a confrontational course or a conciliatory one,” he said.
On Tuesday, Bhutto was put under house arrest for the second time in a week to prevent her from leading a protest procession.
She responded by calling on Musharraf to resign and said that despite earlier negotiations between them, it would be impossible for her to work under him as president.
She also said it was likely that her party would boycott the elections – a threat already made by other opposition parties, including that of the exiled Nawaz Sharif, whose government was ousted in the 1999 coup.
Musharraf admitted he was concerned about the threat of a boycott, but said he thought it unlikely and urged opposition parties against it.
“They must not boycott and I don’t think they’re going to boycott,” he said.
Source: Al Jazeera, News Agencies 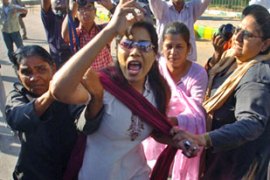