Optimistic
But he said he was optimistic that a major effort this time to evacuate villages and place people in special shelters could mean low-lying Bangladesh would be spared a significant loss of life.

“It is not less severe than the 1991 cyclone; in some places it is more severe. But we are expecting less casualties this time because the government took early measures. We alerted people to be evacuated early,” he said.

The storm started blowing fiercely at 5pm (11:00 GMT) at Dublarchar and at the Hiron Point near the Sundarbans at 7pm, local officials said.
Some areas were inundated by storm surges of more than 2 metres, gale-force winds and driving rain, disaster management officials said.
Moulvi Feroze Ahmed, a local government official on St Martin’s island in the Bay of Bengal, said from his window he could “see tins ripped off the roofs and tree branches flying under the sky covered with thick clouds”.
At least 650,000 people had so far moved into official shelters, where they were being given emergency rations, Ali Imam Majumder, a senior government official, said in Dhaka.
The authorities dispatched dry foods, medicines, tents and blankets to the affected areas, he said.
Weakening
Sidr was weakening into a tropical storm as it moved slowly overland to the northeast, the meteorological department said late on Thursday.
“It has suddenly slowed down, and it may take several hours before it fully crosses the land,” the weather office said.

In the capital, incessant rains flooded some streets, stranding vehicles, while strong winds sent billboards flying in the air.

Power and telephone links have been largely cut, but some mobile networks were working sporadically.
Rivers flowing into the Bay of Bengal along parts of the southern coast had all swollen and were still rising, water department officials said.
Port operations were suspended in the area and ships moved to safer regions.
Flights from Chittagong airport were also suspended.
The meteorology department raised the danger signal to number 10, the highest, at Mongla, Bangladesh’s second main sea port, and number nine at Chittagong and Cox’s Bazar.
Cyclones, where water levels can rise above 5 metres, can cause immense devastation in low lying Bangladesh, a country of 140 million.
Nearly 10 million Bangladeshis live along the southern coast but the area has shelters for only about half a million.
Storms batter the poor south Asian country every year.
A severe cyclone killed more than half a million people in 1970, while one in 1991, which generated a 6 metre storm surge, killed about 140,000 people.
Source: Al Jazeera, News Agencies 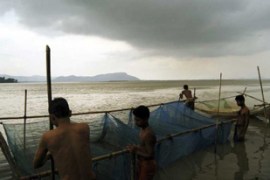