The general also told a news conference in Islamabad on Sunday that he would take the oath of office for another term as a civilian and relinquish his post as army chief, without giving a precise date.
‘Disturbed environment’
Al Jazeera’s James Bays asked Musharraf how a free and fair election could take place while opposition politicians remained in custody in the wake of emergency rule.

Musharraf answered: “They will be in the election process. Let me tell you, in view of the disturbed environment, the terrorist environment … I can assure you that the emergency [will]… keep all this in check.

“I think the emergency will ensure absolutely fair and transparent elections. We are not going to interfere in the process of elections. We would like any [observers] from abroad to come and see the fairness.”

Defending his decision to impose emergency rule, Musharraf said: “I did not violate the constitution and the law of this land.

“It was the most difficult decision of my life.”

He said: “I could have preserved myself, but then it would have damaged the nation. I found myself between a rock and a hard surface. I have no personal ego and ambitions to guard. I have the national interest foremost.

“Whatever the cost, I bear responsibility, and I stand by it.”

Najam Sethi, the editor of Pakistan’s weekly Friday Times, told Al Jazeera the problem was that “Musharraf has neither removed emergency rule, nor taken off his uniform”.

Mixed reactions
Qazi Hussain Ahmed, the leader of Jamaat-e-Islami, one of the country’s largest opposition parties, says that the outcome of the election has already been determined.

Speaking to Al Jazeera on Sunday, he said: “The results would be according to their likings.

Condoleezza Rice, the US secretary of state, on Sunday welcomed Musharraf’s pledge to hold elections but kept up America‘s calls for him to lift the state of emergency as soon as possible.

“Well my reaction is that the positive element, that the elections are going to be held and held very soon and also that the president said he was going to take off his uniform – these have both been essential to getting Pakistan back on a democratic path.”

She was in Lahore, in the province of Punjab, in the run-up to a mass protest she has planned against the emergency rule.

Bhutto said the announcement alone would not defuse Pakistan’s political crisis and that it would be difficult to hold elections when the country was in a state of emergency.

But she said she has not shut the doors on talks with Musharraf.

Speaking to Al Jazeera, Nawaz Sharif, a former Pakistani prime minister who is now living in exile in Saudi Arabia, said Musharraf was deliberately trying to stifle opposition to his rule.

“Any elections under martial law will not serve any purpose … Pakistan is in the grip of great crisis,” he said.

“I think any elections when the judiciary has been rounded up by the government, the chief justice of Pakistan is under house arrest, the judges have been sacked and a new handpicked judiciary is in place and the election commission is not independent.
“What sort of elections does Musharraf want to hold on 9 January?”
International audience

He said Musharraf “favoured questions from foreign reporters. He was clearly trying to convince the international community that the way forward is the way he is proposing”.

Musharraf said he had to take the dramatic step of imposing emergency rule to address the “turmoil, shock and confusion” in Pakistan and to better fight Muslim fighters in the interior of the troubled northwest and in the Swat valley.

That battle, he said, would continue until the extremists are defeated.

Musharraf has repeatedly said that the judiciary was hindering action against al-Qaeda and Taliban-inspired leaders and their followers.

Before he declared emergency rule, elections had been expected by mid-January, two months after the expected dissolution of the national and provincial assemblies.

He is under pressure from the US and other Western allies to return to democracy after last week imposing a state of emergency.
Source: Al Jazeera, News Agencies 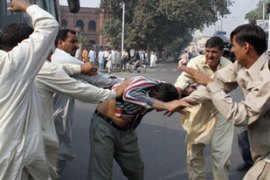 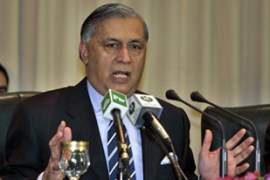 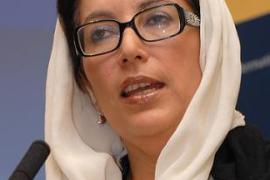