As part of its Walls of Shame series, Al Jazeera visits the enclave of Ceuta and finds social and physical divisions separating its Spanish and Moroccan neighbours.

The town of Ceuta is a geographical anomaly, being part of mainland Africa but also constituting one of the last vestiges of Spanish rule in northern Morocco and being the southernmost outpost of Europe.

Given its geographic significance, it is no surprise that Muhammad al-Idrissi, one of the foremost map-makers of the ancient world, was born here in 1099.

Al-Idrissi’s maps helped make possible the great voyages of discovery which eventually led to colonisation and, as in the case of Ceuta, the presence of Europe in Africa.

These days economic opportunism is still paramount in the region, but now the migration is in the opposite direction, as those who were formerly colonised head north, fleeing poverty, war, and oppression.

The crossing between Morocco and Spain has become a magnet for tens of thousands of workers and migrants, both legal and illegal, as it represents the backdoor into the prosperous European Union and the hope of a better economic future.

What the migrants find is two lines of fencing four metres high, six kilometres long and mostly paid for by the EU.

Juan Luis Arostegui of the ruling People’s Socialist Party of Ceuta says the fence has been the only effective method found for dealing with the problem of illegal immigration.

“This problem affects every part of the world,” he says. “It’s different in Ceuta because the problem is concentrated in just a few square kilometres.”

What would-be migrants to Europe also find is a holding centre before their status as refugees is decided, which typically takes months.

It’s not a prison, but there are constraints, as Karim Darraj, a Tunisian refugee at the centre, explains.

“I came through Algeria and Morocco. I stowed away in a lorry but was caught by a police dog and given a note to come here.

“There’s nothing to do. I can’t earn money, I can’t work, or even study. There are lots of people stuck with their families here. As for getting to Spain illegally, you have to pay and bribe … it is very difficult.”

There are people at the centre from distant lands, such as Gulam Amin, who fled Kashmir.

But despite the centre, thousands of people are let into Ceuta from Africa every day.

Thousands of Moroccans trudge past the deserted guard posts that separate the Spanish enclave from Morocco carrying bundles of soap, clothes, and oil for resale at home.

It is not an entirely legal practice but the Spanish authorities turn a blind eye, knowing how profitable the trade is to the city.

However, this cross-border trade is at odds with an old relationship built on mistrust and suspicion between Spain and Morocco over Ceuta.

Tensions flared again recently when a visit to the enclave by Juan Carlos, the Spanish king, triggered angry protests.

The grievances date back to the collapse of Muslim rule in Spain at the end of the 15th century which, for some, gives the issue a religious dimension.

“The Christian majority here want to stay living in isolation … rejecting any other non-Christian element that might share the city with them,” Muhammad Ali, from the Union of Ceuta’s Muslims, says.

In the impoverished hillside neighbourhood of Principe Alfonso, where half of Ceuta’s Muslims live. Disaffected residents cite examples of official neglect contributing to their poverty and despair.

The residents feel marginalised and make no secret of where their allegiances lie, praying every Friday for the health and prosperity of the king – the king of Morocco.

“The marginalisation of Muslims is observed in many ways,” Ali says.

“Rather than offering permanent work, Muslims get short contracts – three or six months. On the other side, Christians get permanent jobs which help them to stay and have roots in Ceuta.

He also says there is cultural marginalisation. Christian culture is celebrated openly in Ceuta, whereas Muslims who pay their taxes to the authorities do not enjoy the same benefits.

Francisco Correro Tocon, a Catholic priest in Ceuta, claims however that “the relations between members of different faiths are very cordial”.

“Certainly, it is normal to find a multitude of faiths here, there is no barrier between us … everyone expresses their faith naturally and openly,” he says.

While the two men differ on the degree of religious interaction in Ceuta, they agree there are growing demands for a more constructive approach, to bring about a lasting solution to the problem of illegal immigration affecting Ceuta.

The Spanish fence in Ceuta replaced one that was much lower and too easily breached, with the result that, for the truly desperate, Ceuta became a stepping-stone into continental Europe.

Those who still chance their luck wait in the surrounding forests, but if caught, they are transported back to their countries of origin by the Moroccan authorities.

“The solution is for us to help the migrants’ home countries with political and economic support,” Correro Tocon says.

Ali agrees “the solution is in Europe. The advanced colonial countries of Europe have to return back some of the wealth they appropriated from the colonised African countries.”

Across the Mediterrenean in the Bay of Cadiz, the legacy of attempted illegal immigration can be found.

In October 2003 Rafael Quiros was shocked by the sight of 35 male corpses – washed ashore close to his home, 12 of them from the same Moroccan village.

Quiros, a schoolteacher, was so affected by the sight he decided to take action and founded the charity Solidaridad Directa to ensure that the Moroccan village of Hansala, does not lose any more of its men.

He and his charity are aiming to change the mindset of Hansala residents, who still view migration as their only salvation, paying little attention to the well-known perils.

“When we found dead bodies, we went with our own cars, with our own money and we went to Morocco, we found the people of Hansala, and we told them about the risks of emigration… it causes death,” he says.

Solidaridad is pragmatic in its approach by linking the economic interests of Spanish citizens with the well-being of those in a remote Moroccan village.

It costs taxpayers in Spain $2,900 every time a drowned man is sent back in a coffin – money that could be better spent on developing the migrants’ place of origin.

This grassroots initiative is at odds with the fencing and policing approach favoured by the European governments of Europe.

Ceuta’s barbed-wire barrier may, for a time at least, stop the flow, but many say it does nothing to remove the enduring, underlying causes.

“The frontiers are something artificial, at the end, they are not going to stop people immigrating,” Quiros says.

“It can control it, but not stop it. To stop immigration, we have to change our own mentality.” 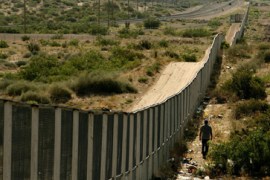 Trouble at the border

Al Jazeera finds residents are not happy on either side of the US-Mexico frontier. 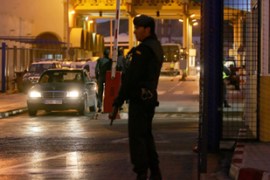