Dozens more were ordered to report to police stations for questioning, he said.
Meanwhile, three days of mourning began across the Palestinian territories for the seven people killed in the violence on Monday.
More than 100 others, including Hamas and Fatah members, were reportedly wounded after gunfire erupted at the rally where hundreds of thousands of people were commemorating the death of Yasser Arafat, the former Palestinian president.

Fatah and Hamas blamed each other for the deaths.

The office of Mahmoud Abbas, the Palestinian president, said on Tuesday the period of mourning was to “pay homage to the martyrs killed by the bullets of the putschists”, referring to Hamas forces whom Fatah accuse of carrying out a coup in the Gaza Strip earlier this year.
Flags are to be flown at half-mast on buildings of the Palestinian Authority, the government run by the Fatah party founded by Arafat.
The Palestinian Authority which Arafat set up in 1994 now controls only scattered, autonomous areas of the occupied West Bank.
Hamas, which opposed Arafat’s policies during his lifetime, rules the Gaza Strip after routing its Fatah rivals in June.
Witnesses said the shooting broke out as crowds of Fatah supporters threw rocks at Hamas security forces and chanted “Shia, Shia”, accusing them of serving the interests of Iran.
Nour Odeh, Al Jazeera’s correspondent in Gaza City, said gun battles between Fatah and Hamas fighters intensified as people fled.

The event drew as many as half a million people, according to Ahmed Hellis, a senior Fatah official.
‘Horrible crimes’
Salam Fayyad, the Palestinian prime minister in Abbas’s government, said in a statement from his office: “Senior officials in Hamas ordered these crimes which were carried out by the Hamas militia in order to terrify the people …  Now their punishment is a national duty.”
Abbas, on official television denounced “these horrible crimes committed by a band of rebels … before the eyes of the entire world”.
Fatah officials accused Hamas forces of opening fire from the nearby Islamic University, but Hamas said its men had come under attack from Fatah fighters and fired back.
The rally, seen as a demonstration of Fatah support, came as Abbas prepares for new peace talks with Israel, starting with a US-hosted Mideast conference in Maryland later this month.
Abbas is also struggling to fend off claims by Hamas that he does not have a mandate to negotiate.
In a gesture of support for the Fatah leader, Ehud Olmert, Israel’s prime minister, plans to release more than 400 Palestinian prisoners before the conference, according to Israeli legislators.
Around 9,000 Palestinians are held by Israel, and Abbas’s government has asked for 2,000 to be freed before the meeting at the planned Annapolis peace conference in Maryland, US.
‘Harsh response’
Israel’s Shin Bet security service has said it would grant amnesty to additional Fatah gunmen in the West Bank, after declaring its first amnesties of about 100 Fatah members a success.
Mohammed Dahlan, Fatah’s former security chief in Gaza, said Hamas’s harsh response was a sign its grip on Gaza is weakening.
“What is happening in Gaza today is the beginning of the end of Hamas on the popular, religious and moral level,” he told Palestine TV.
Hamas said Monday’s events were an attempt to exploit Arafat’s memory in order to “cause chaos and confront Hamas”.
Ihab al-Ghosein, the spokesman for the Hamas-controlled interior ministry, said: “Fatah is responsible for continued incitement against the Palestinian police, and there was a clear attempt to bring back chaos.”
More clashes erupted later on Monday during the funeral for one of the victims, 19-year-old Ayoub Abu Samra, who witnesses said had been shot dead after getting into a scuffle with a Hamas policeman.
During the funeral, mourners fired in the air, and said Hamas police fired at the procession. Hamas police denied opening fire, saying the marchers threw stones at them.
Three people were hurt, rescue workers said.
Source : Al Jazeera, News Agencies 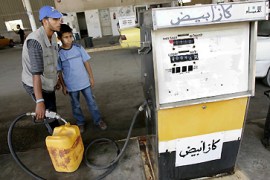