Bhutto said that Musharraf’s decision to keep the emergency law in place would make campaigning in upcoming parliamentary elections “difficult”.

Ameer ul-Azeem, a spokesman for a coalition of opposition parties, said they would meet soon to decide whether to pull out of the elections.
He said that the coalition may appeal to the PPP to join any boycott.
Transparency threatened
Opposition parties in Pakistan say that Musharraf’s decision to keep the state of emergency in place threatens the transparency of parliamentary elections.

Musharraf said on Sunday that there would be no time limit on emergency rule, which he imposed on November 3.

He also said he would take the oath of office for another term as a civilian and relinquish his post as army chief, without giving a precise date.
Nazwaz Sharif, a former prime minister of Pakistan currently in exile in Saudi Arabia, told Al Jazeera that Musharraf’s clampdown on Pakistan’s judiciary also needed to be addressed.
“Before we talk about the elections, we should make sure that the judiciary in Pakistan will go back to the way it was before November 3, before declaring the state of emergency. And this is the most important matter,” he said.
Musharraf criticised
“That is why the elections will be useless if they are carried out in the absence of law and without the participation of all parties. Otherwise, the situation will become complicated.”
Under the state of emergency, key figures in the judiciary have been sacked or detained, including Iftikhar Chaudhry, Pakistan’s chief justice.
The press in Pakistan on Monday joined criticism of Musharraf, saying that elections would be undermined if held under emergency rule.
“[Musharraf’s] new scheme as announced casts a doubt on the credibility of the forthcoming elections,” Dawn, Pakistan’s oldest English language daily newspaper, said.
The Nation, another English language newspaper, on Monday said: “It would be hard to dispel the impression of a stage-managed affair without a free media, the freedom to hold meetings, take out processings and do canvassing – the traditional modes of electioneering.”
US concern

Musharraf’s decision on Sunday to hold parliamentary elections on schedule came after the United States and other Western nations expressed concerns over the possibility of delays.

However, Condoleeza Rice, US secretary of state, said she was concerned that Musharraf had not set a time limit for the end of emergency law.
“It’s not a perfect situation,” she said on Monday.
Joe Biden, chairman of the US senate foreign relations committee, said election would be a “sham” if emergency rule was not withdrawn.
Bill Richardson, UN ambassador in the former administration of US president Bill Clinton, said: “You can’t have democracy halfway.”
Source: Al Jazeera, News Agencies 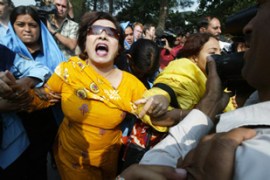