Remembrance Day services, commemorating the lives of those who died in the first world war and other conflicts, have taken place around the world, including among soldiers involved in operations in Iraq and Afghanistan.

In the UK, Queen Elizabeth II, the British monarch, paid silent tribute on Sunday at the Cenotaph memorial in London to those who have died serving Britain since the first world war.

Prince William, second in line to the throne, for the first time also laid a wreath at the Cenotaph.

Among those he remembered were Major Alexis Roberts of the Royal Gurkha Rifles, his former army mentor from his training school days at Sandhurst who was killed in action in Afghanistan last month.

The leaders of Britain’s political parties also laid wreaths, as did high commissioners of Commonwealth countries whose soldiers fought in both world wars as part of the British empire.

In Afghanistan, where more than 80 British soldiers have died since the Taliban government was toppled in 2001, 100 Royal Marines from 40 Commando held a service in Helmand province.

Soldiers in Iraq also held services and parades and about 200 veterans of the Falklands War, fought between Britain and Argentina, have returned to the islands for a service of commemoration in Port Stanley.

“I’m here for the moment, this year. I don’t know how it will be next year,” said Lazare Ponticelli, aged 109, at a small ceremony in the working-class Paris suburb of Kremlin Bicetre.

Elsewhere, Nicolas Sarkozy, the French president, broke with tradition by delivering a speech at a ceremony beneath the Arc de Triomphe, calling on young people not to forget the lessons of the war.

King Albert, Belgium’s monarch, laid a wreath at the Monument to the Unknown Soldier, while over the weekend thousands travelled to the site of the Battle of Passchendaele to to pay tribute to those who died during the 1917 battle and mark the 90th anniversary of the war’s end.

The battle of Passchendaele, one of the bloodiest battles in the first world war, was called to a halt after Canadian reinforcements replaced devastated British, Australian and New Zealand units near Passchendaele and captured the ruined village November 10, 1917.

Jim Prentice, Canada’s industry minister, and his wife, led a Canadian tribute to the tiny village on Saturday. 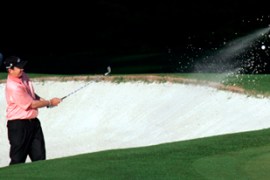