The A380 order adds to the carrier’s backlog of 47, the largest order for the super jumbo aircraft from any airline.

Rolls-Royce is also a major beneficiary of the move, which may be worth as much as $8.4bn, as Rolls-Royce offers the only engine available on the Airbus airplane.

Separately, DAE Capital, the aircraft-leasing arm of Dubai Aerospace Enterprise, said it would purchase 70 Airbus A320s and 30 A350s for a total $13.7bn at list prices.

“This agreement will help us meet the demand for new aircraft, particularly in the Middle East and Asia, over the next decade and more,” Robert Genise, chief executive officer of Dubai Aerospace’s DAE Capital leasing unit, said in a statement.

“We are perfectly placed to secure our position by taking advantage of the significant growth of the aviation industry within this region and other emerging global markets.”

Qatar Airways, another fast-growing Gulf airline, signed an agreement on Sunday with Boeing for 30 Dreamliners and five 777 cargo jets in a deal valued at $6.1bn at list prices.

Akbar al-Baker, the Qatar Airways chief executive officer, indicated the government-owned carrier might go for a public share listing in three to four years’ time when the company starts making a profit.

Gulf appetite
Asked to explain the Gulf appetite for aircraft, John Leahy, Airbus sales chief, said: “If they don’t place their orders now, they won’t get the delivery early enough to meet their needs.”

According to Boeing, the Middle East is expected to spend $190bn to buy 1,160 passenger jets over the next 19 years.

Boeing estimates also claim that during that same period, passenger traffic in the region will grow annually by 5.7 per cent, while freight is due to rise by 7.1 per cent.

These figures are way above the average world estimates for passenger and freight traffic.

Airbus has also named Prince Walid bin Talal bin Abdul Aziz al-Saud, a Saudi billionaire, as the first private buyer of the A380.

The prospective buyer’s identity had been kept secret for months but was unveiled to coincide with the Dubai air show.

Walid, whose interests span from hotels and financial institutions, has ordered a VIP version of the A380, dubbed the “Flying Palace”.

He already owns a Boeing 747-400, the newest type of the original jumbo jet currently in service. 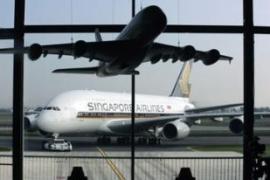