But even Hamas, which opposed Arafat’s policies during his lifetime, praised the former leader.
“We agreed with president Abu Ammar a lot and we disagreed with him a lot, but in spite of this we consider him a symbol of the Palestinian nation,” Fawzi Barhum, a Hamas spokesman said.
“His memory will endure forever, in every Palestinian boy and girl, in every man regardless of his political affiliations.”
Gaza’s Hamas-run police broke up a number of small demonstrations in the Gaza Strip, arresting several young men who were waving the flags of the Fatah movement of Arafat and Abbas, witnesses said.
Mausoleum opened
On Saturday, dozens of Palestinian leaders and foreign dignitaries gathered for the opening of the new mausoleum complex at the Muqataa compound, where Arafat spent the last years of his life under siege by Israeli forces.
“We inaugurate this everlasting monument in remembrance of the eternal martyr Yasser Arafat who strove in the path of God and his country and his people,” Abbas said in a short speech.
The complex measures 11 metres by 11 metres to symbolise the date of Arafat’s death, and includes a 30 metre lighthouse with a laser beacon pointing in the direction of Jerusalem, where Arafat always wished to be buried.
The mausoleum complex will include a mosque and a museum exhibiting his personal effects, items from his office, presents and documents.
In four decades of leading the Palestinian struggle Arafat came to be despised by many in Israel who considered him an obstacle to peace and responsible for the launch of the second intifada in 2000.
But he is still exalted by Palestinians of all political persuasions.
Arafat “was the embodiment of steadfastness in the face of storms, and was unwavering in clinging to Palestinian national rights,” Taysir Khaled, a senior member of the Popular Front for the Liberation of Palestine, said.
Arafat’s tomb, guarded round the clock by members of the presidential guard, has become an obligatory destination for foreign dignitaries who come to the Muqataa compound.
The precise cause of Arafat’s death in a Paris hospital in 2004, at the age of 75, remains a mystery.
Just hours after Abbas’s speech, Palestinian negotiators scrapped talks relating to the Annapolis conference, saying they were stopped at an Israeli checkpoint.
They requested the preparatory discussions be moved abroad.
“We cannot carry out negotiations like this,” said  Ahmed Qurie, the chief Palestinian negotiator after Israeli soldiers blocked his team near Jerusalem while on its way to meet Israeli counterparts for pre-conference talks.
Qurie and other members of Abbas’s team had been scheduled to meet the Israeli team at a location inside Israel on Sunday.
An aide to Qurie said the negotiators informed Israel they wanted to move the talks to another country but offered no other details.
Source: News Agencies 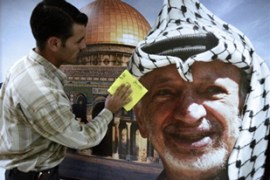 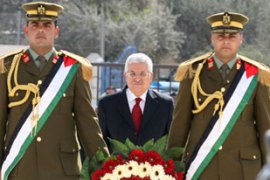 Palestinians gather at a new mausoleum to the iconic president in Ramallah.