“The state of emergency will be lifted in the nearest future, within the next few days,” he said on state television.
The president also rejected Western pressure for the state of emergency to be lifted immediately.
“We know better what is good for Georgia in the short- and long-term.”
The move comes as the US said on Saturday it was sending an envoy to Georgia to urge its government to “immediately” lift emergency rule.
Saakashvili imposed emergency rule on Wednesday and ordered troops on to the streets of the capital, Tbilisi, following protests against the government in which police officers used fired rubber bullets, tear gas and water cannons.
Protests halted
On Friday, parliamentarians voted to back Saakashvili’s state of emergency order, a move that keeps restricts media broadcasts and bans public gatherings for a 15-day stretch.

On Thursday Saakashvili agreed to move forward the country’s presidential elections to January 5 in an apparent concession to protesters.

Badri Patarkatsishvili, a prominent Georgian businessman who has  financed the country’s opposition, announced on Saturday that he will run in for the post.
He added that he would stand aside for any candidate who could unite the opposition.
Earlier, the Georgian authorities said Patarkatsishvili, who is believed to be out of the country, was suspected of plotting a coup against Saakashvili and that he was wanted for questioning.
‘Autocratic’ rule
Opposition candidates said they would halt street protests following the move. The government’s crackdown on the protests was condemned by the US and Nato, with Jaap de Hoop Scheffer, Nato’s secretary-general, saying on Thursday that such acts were “of particular concern and not in line with Euro-Atlantic values.”
The US, which is Saakashvili’s main backer, has also called for restraint.
Opposition groups and protesters have accused the Georgian president of of corruption and increasingly autocratic rule.
Saakashvili, in turn, has accused Russia of stirring unrest and the two nations have expelled three of each other’s diplomats over the row.
Source: Al Jazeera, News Agencies 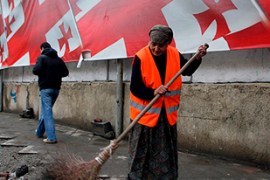