The government announced on Thursday that Suu Kyi would be allowed to meet some of her party members.
The meeting with Aung Shwe Lwin and Nyunt Wa, senior executives of the NLD, as well as Nyan Win, was the first face-to-face talks Suu Kyi has held with members of her party since May 2004.

Nyan Win said Suu Kyi looked “fit, well and energetic like before. She is full of ideas”.

Suu Kyi suggested to her colleagues that the generals could make a healing gesture after September’s unrest by releasing political prisoners.

Amnesty International, a UK-based hu8man rights groups, said on that 700 political prisoners in detention in Myanmar, 91 of which were detained iduring the crackdown on pro-democracy protests in September.

However, appearing to concede that she will remain detained for the immediate future, Suu Kyi told her colleagues that she will ask for two liaison officers of her choice to help her communicate with them.

She said she will also ask Aung Kyi to make arrangements so that she can see the other party leaders whenever necessary.

In 1990 Suu Kyi’s party won a general election but the generals have refused to recognise the result and she has been in government detention for 12 of the past 18 years.

Gambari initiative
The talks came after Ibrahim Gambari, the UN’s special envoy for Myanmar, visited the country for a second time since a violent crackdown on pro-democracy protesters and pushed for a dialogue to resolve the crisis.
On Thursday, Gambari and Suu Kyi met for an hour.
Gambari subsequnetly released a statement from Suu Kyi.
“In the interest of the nation, I stand ready to co-operate with the government in order to make this process of dialogue a success,” the statement read aloud by Gambari said.
“I am committed to pursue the path of dialogue constructively and invite the government and all relevant parties to join me in this spirit,” she said.
The statement was Suu Kyi’s first since her latest period of detention began in 2003.

However, analysts were cautious about the chances of genuine progress being made between the two sides.

“My reaction is extreme scepticism that this will lead to real dialogue between her and the [generals], or genuine political change,” Donald M. Seekins of Japan’s Meio University said.

“The [government] likes to move Suu Kyi and the NLD around like pieces on a chessboard, to satisfy the international community.” 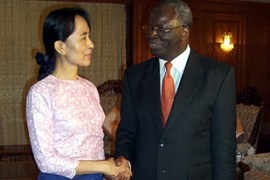 UN envoy holds talks with detained leader during his second visit to Myanmar. 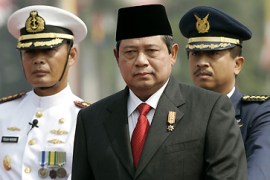