He said the economy is likely to experience “noticeably” slower growth in the final three months of the year than the robust 3.9 per cent annual rate of the third quarter, saying a housing slump looked set to intensify and consumer and business spending could slow.
Dollar woes
Bernanke said there were four big hurdles facing the US economy: falling house prices, concern over bank profits following the sub-prime crisis, the high price of oil and the weak US dollar, for which Wall Street analyst site several reasons.
Brian Fabri of BNP Paribas said: “One of course is that the US economy is growing slower than the economies of most of the rest of the world right now.

“Two, our interest rates are falling relative to interest rates in our countries. Three, the big holders of foreign assets are probably overweighted in their investments in dollars and they’re looking to diversify.”

Many Americans hardly notice the weak dollar, although fewer of them are said to be planning foreign holidays next year than this year, and for US manufacturers the cost of imports such as steel and oil will rise dramatically.
But Nicolas Sarkozy, the French president, told the US congress this week that the weak dollar risks sparking economic war as US exports become cheaper in the rest of the world and foreign imports most costly.
His complaint was that the US gave too much room for financial speculation.
On Thursday, Bernanke’s comments on the growth outlook weighed on stock prices and the dollar and gave a lift to prices for US government debt, as traders saw it suggesting a greater likelihood the Fed would cut benchmark overnight rates again from their current 4.5 per cent.
The Dow Jones industrial average closed 1 per cent lower while the tech-heavy Nasdaq slid as much as 3 per cent.
However, it was not all bad news as Bernanke said the US central bank expected the world’s largest economy to regain steam by the middle of next year as housing and financial markets stabilised.
“We think that by the spring of early next year, as these credit problems resolve and as, we hope, the housing market begins to find a bottom … the broader resiliency of the economy, which we are seeing in other areas outside of housing, will take control and will help the economy recover to a more reasonable growth pace.”
Source: News Agencies 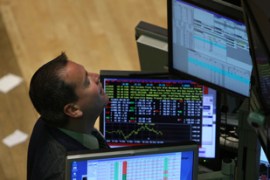