The decision comes amid increasing Russian anger over US efforts to build a missile defence system in eastern Europe.
The vote amounted to legislative confirmation of a decision to freeze Russian adherence to the pact, already announced by Vladimir Putin, the president, in July.

The CFE treaty was modified in 1999 to take account of the break-up of the Soviet Union, but Russia is the only country to have ratified the new version.

A senior Russian official said Wednesday’s vote did not mean Russia was withdrawing from the updated pact, only that it wanted Nato member states to ratify and comply with it as Moscow had done.

The move will take effect on December 12, after final approval by the upper house of parliament and Putin.

Nato countries have said they would only ratify a revised version of the CFE treaty once Moscow has lived up to a pledge made in 1999 to pull its troops out of the former Soviet republics of Georgia and Moldova.

Sergei Kislyak, the deputy foreign minister, said: “Before thinking of any big, new agreements we need our partners to fulfill what they have already agreed to.”

Shortly before the vote, a top defence official said Russia was weighing the possibility of increasing force deployments on its western flank in light of suspension of the CFE treaty.

“The position of the defence ministry and Russia as a whole is being worked out now and when a decision is reached it will be announced.” 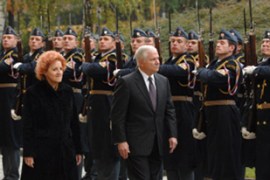 Russia is demanding that a European arms treaty be ratified.