Mahmoud Abbas, the Palestinian president, was due to travel to Gaza city on Thursday for talks with Ismail Haniya, the prime minister, on ending the violence.

The two rival groups agreed their fourth truce in as many days on Wednesday in a bid to stop the clashes that have shaken their two-month-old unity cabinet, raised fears of a full-blown civil war and sparked international concern.

But within hours of the truce taking effect, two Fatah loyalists and three Hamas fighters were killed in separate shooting incidents.

Three previous ceasefires collapsed within hours since the violence first flared on Sunday.

His bodyguards returned fire and the gunmen ran off. Nobody was injured.

The bloodshed has sent terrified Gaza residents cowering indoors, adding to the chaos in the territory already reeling from an economic aid boycott imposed after Hamas first came to power last year.

The fighting has also threatened to torpedo recent efforts to revive Middle East peace talks that have been stalled for six years.

Forty-three people, the vast majority of them Fatah loyalists, have been killed since Sunday. The toll has included two civilians, with more than 100 people wounded.

Ban Ki-moon, the UN secretary-general, the European Union and the United States have called for a halt to the violence.

In Geneva, the International Committee of the Red Cross called  “on all parties to exercise restraint and to ensure that civilians not taking a direct part in the fighting are spared.”

Palestinian fighters fired two rockets at the Israeli town of Sderot on Thursday morning, a spokeswoman for the Israeli army said.

The Israeli army also attacked a Hamas training base in northern Gaza. 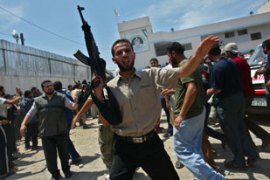 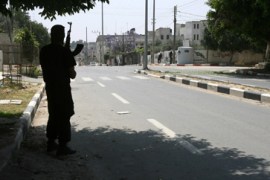 Palestinians in Gaza hide in fear amid gunfire and bomb blasts.

Palestinians die in bloodiest clashes since Hamas and Fatah agreed to share power. 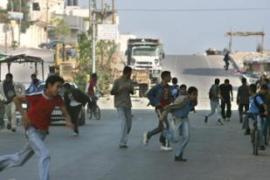 Security forces to be deployed as fighting continues and interior minister resigns.