The last-minute reprieve comes after the justices agreed at the end of September to decide on a challenge to the lethal injection procedures in Kentucky.

A statement from the Mississippi department of corrections read: “Now that the US supreme court has deemed the method of execution needs to be reviewed, the state will await the final order of the court.

“The agency will work within any newly established guidelines to ensure that executions are carried out in a constitutional manner,” it said.

The supreme court has only allowed one execution since it said it would hear a legal challenge from two inmates on death row in Kentucky.

The case is likely to be heard before the court goes into recess in July.

State and lower federal courts have stopped all other scheduled executions as well, and the intervention in Berry’s case came after his lawyers asked for delay until the Kentucky hearing.

The inmates’ legal team claim that the deadly mixture of chemicals would cause unnecessary pain, constituting cruel and unusual punishment, which would violate the constitution.

Concerns were raised after an investigation into the execution of Joseph Clark who was sentenced to death for murdering a man in Ohio in 2006.

Witnesses said it took him 86 minutes to die while he screamed in pain and court documents showed the technician had tried 19 times to insert the needle for his execution.

The same procedure is used in more than 30 states.

In 2006 there were 53 executions in the United States, all but one of them by lethal injection.

In May, prison officials in California revised the procedure for administering lethal injections after a federal judge stopped executions because he found staff were improperly trained and equipped.

In Mississippi, Berry had eaten his last meal and said goodbye to members of his family and was waiting to go from his cell to the execution chamber when the decision came through.

More than 20 members of the victim’s family called a news conference after the reprieve to express their outrage at the decision.

“Now you want to tell me that we got a fair shake today?” said Charles Bounds, the victim’s husband.

“It has brought back all the grief. We were not expecting it to be this hard exactly,” said their daughter, Jena Watson.

“This means further delay in an execution that is already very long overdue,” Kent Scheidegger, legal director of the Criminal Justice Legal Foundation, said. “This is a man who beat a woman to death 20 years ago, and we shouldn’t be concerned that much about a very remote chance that he might feel some pain in being punished for that crime.”

“Right now I think we have a defacto moratorium on lethal injections in this country.” Richard Deiter, director of the Death Penalty Information Center, said. 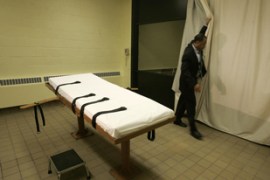