Mr and Mrs Zhang take great care of what they feed their two children.

Like many families in this part of China they have learnt the tragic cost of trusting the labels on the food they give them.

In 2004 hundreds of children in the southern province of Anhui were admitted to hospitals suffering from malnutrition.

Although bloated, many weighed less than they had when they were born.

More than 50 died – the result of being fed on fake milk powder.

Stacked on a table in the Zhang family’s home are the empty milk powder boxes they fed to their daughter Rong Rong.

The powder turned out to contain only a sixth of the nutrition listed on the box.

After months of insatiable eating and crying, Rong Rong died.

Despite the global outcry at the time, Mr Zhang worries it could happen again.

“These days when I’m looking in the markets and shops I see these fake brands coming back again,” he says.

“It seems as if the supervision of the quality of milk powders is not that good.”

The Chinese government has tried to crack down on fake food and drugs.

As an example the country’s food and drug chief was arrested for taking bribes to certify unsafe medicines.

He was sentenced to death and executed in July in what Chinese state media said was a warning to other “corrupt elements”.

But many problems still remain.

Mr Wang is China‘s premier consumer watchdog. He prefers to keep his identity concealed so he can carry on his work undetected.

China has strict safety standards, he insists, but the problem is enforcing the law.

“In fact the central government is very strict about food and drug safety, he told Al Jazeera.

“The problem is that local governments try to protect their own interests, so they don’t fully enforce the policies of the central government.” 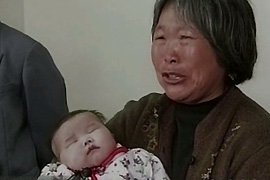 And in China‘s countryside, where the majority of the population live, there is a very real price to pay for knowing what is inside the things you eat.

At a nearby supermarket we bought a can of baby formula made by a well-known international brand.

But it costs more than $10 a can, far beyond the reach of most farmers in Anhui who get by on about one dollar a day.

But that is a price Mr Zhang would gladly have paid. Instead, he can only mourn at his daughter’s grave.

He says he still does not trust the labels on what his children eat, because he knows in China one man’s food often is another’s poison.